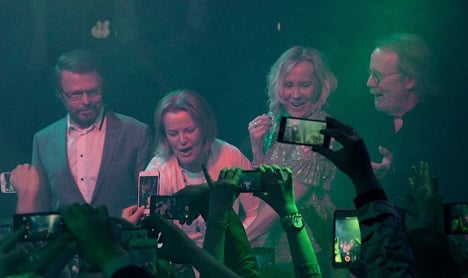 The new entertainment venue opened its doors to 130 special guests and fans lucky enough to have snapped up one of the 1,340 kronor ($157) tickets at 6pm on Wednesday.

Ulveaus had told Swedish media ahead of the opening that his fellow three original members of Abba had all been invited to the launch, but had been tight-lipped about whether or not they were actually coming.
But at around 7pm Benny Andersson, Anni-Frid Lyngstad (known as Frida), Agnetha Fältskog and Ulvaeus himself all appeared, separately, on the red carpet, much to the delight of fans.

Lyngstad smiled warmly for the cameras but declined to talk to Swedish media. “No, absolutely not, she said,” before disappearing inside.

And here comes Benny Andersson! 2/4 (or 1/2!) of #Abba in the house! #MammaMiaTheParty pic.twitter.com/kor7P9J7bS

Wow #Agnetha is here. That's 3/4 of #Abba. Since #Björn is hosting the event it means their first reunion since 2008 pic.twitter.com/TYFNmnIvLT

Later in the evening the quartet all got up to pose side by side for a brief 20 seconds, long enough for fans and guests to snap a rare picture of the Swedish pop legends 'reunited' on stage together.

The four Abba members had not appeared together since 2008 when they walked down red carpets in London and Stockholm for the film premieres of Mamma Mia!. When the long-awaited Abba museum opened in the Swedish capital in 2013, Fältskog was in the UK promoting her latest album.

They had not been been seen on stage since Abba's heyday more than 30 years ago. A picture from inside the premiere sent in by a fan. Photo: Private
IN PICTURES: Inside Stockholm's new Abba venue
The spoken parts of Ulvaeus' new show are in Swedish, with actors from the Nordic nation playing different characters to those in Mamma Mia! despite sharing a similar setting to the musical. They do however sing Abba tracks in English, including some that weren't included in the stage performance or movie.
However Ulvaeus told The Local from the blue carpet that a version entirely in English is being developed for Eurovision Song Contest week in May as well as the summer tourism season.
“A few days after tonight I'll be going to the West Indies and I'll be translating the script into English,” he said at Wednesday's premiere.
But asked by Swedish media if another future event in his calendar might include a more formal Abba reunion, he said it was incredibly unlikely.
Andersson, who refused to comment on an Abba stage reunion was instead asked by The Local if he believed Sweden had a chance at winning Eurovision Song Contest 2016, which is being hosted in Stockholm in May.
“I have no idea! I wouldn't know,” he said.

Just spoken to #Björn and he's off to West Indies next week to translate event scripts into English in the sunshine pic.twitter.com/2oJ3mARafl

Iris Werner from Germany and Evelina Nyenss from Belgium were among the first fans to arrive on Wednesday evening and spoke to The Local just before the event started as they waited in around -10C for the doors to open.

“I grew up in the GDR (east Germany) so I never got to see them together. I hope it will be a good night,” Werner said.
Nyenss, who turns 23 next week, said she had bought a ticket as an early birthday present for herself.
“The music always makes me happy.” Abba fans Iris Werner and Evelina Nyenss. Photo: Maddy Savage/The Local
Stockholmer Micke Bayert, who used to run an Abba fan club and has published a book about the band, was also among the lucky few who got to see the show and tuck into a menu that included olives, tzatziki, Greek-style meatballs and ouzo.
He told The Local from inside the venue that seeing the four Swedish pop legends sit down for dinner together was “a dream come true that no one believed would happen”.
Other fans tweeted that they had seen Frida and Agnetha seated at the same table and singing along to their songs.
Dutch visitor Wouter Timmers, who is part of the official Abba fan club, told The Local that he was thrilled to hear some of the band's lesser known tracks included in the new show.
“It is wonderful and very rare to see them together in the same room. This would work great in the Netherlands,” he added.

Other fans who didn't get anywhere near Wednesday's opening also got excited at the notion of all Abba members in the same place. Here are some of the best reactions sent to The Local on Twitter:

This is the dream. Can't believe I'm missing this!! https://t.co/M8HblV7O7L

This is happening down the road from me yet here I am washing my underwear https://t.co/TEzdK9QRyr