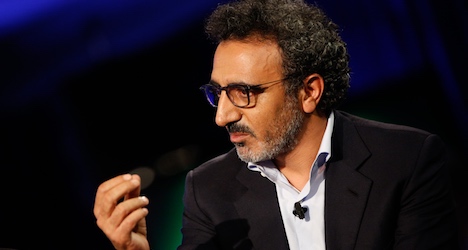 Ulukaya, a 43-year-old Turkish Kurd who moved to the United States as a student in 1994 and made a fortune there with his Greek-style Chobani yogurts, said governments and other organizations could not resolve the global refugee crisis without the corporate world's help.

On the opening day of a five-day gathering in Davos, the Tent Foundation, which he set up to aid refugees, launched a pledge campaign for companies to give money or jobs to refugees, with early sign-ups including Airbnb, the Ikea Foundation, LinkedIn, MasterCard, and UPS.

“If we're going to give hope and opportunity to the more than 60 million refugees around the world, it must come from more than just governments and NGOs,” said Ulukaya said.

“Businesses and innovators have a critical role to play,” he added.

“The refugee crisis is not only unprecedented in scale, it is a humanitarian challenge that is dynamic and ever-evolving, with wide-ranging implications for refugees, host communities and the global community.”

European Union nations are struggling to come up with a clear plan to cope with the arrival of more than a million refugees and migrants last year, in the worst migration crisis to hit the continent since the Second World War.

Many of them are Syrians fleeing the brutal civil war that has seen the country's neighbours take in millions of refugees since it broke out in 2011.

Turkey and Lebanon host the highest numbers of Syrian refugees, with 2.2 million living in Turkish territories and just over one million in Lebanon.

Migrants are a major theme of this year's World Economic Forum in Davos, where some 2,500 business and political leaders gather annually to try to confront looming global challenges.