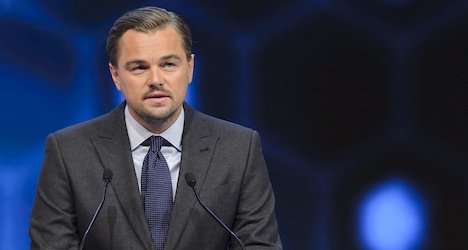 The movie star was honoured for his efforts to combat climate change and protect endangered species through an environmental foundation he established 15 years ago.

Speaking to the gathering of world leaders, including US vice president Joe Biden, and business magnates, DiCaprio called on them to support efforts to transition economies to an emissions-free future by 2050 with energy provided through renewables.

“We simply cannot afford to allow the corporate greed of the coal, oil and gas industries to determine the future of humanity,” he said during a ten-minute acceptance speech for his award.

“Our planet cannot be saved unless we leave fossil fuels where they belong — in the ground.”

DiCaprio, who is the UN’s “messenger of peace for climate change” indicated he was alarmed by the impact of climate change while travelling the world to make a documentary on the subject.

He was one of four artists receiving the WEF's Crystal Award.

Other winners included Grammy-award-winning American musician and social activist William Adams, of the Black Eyed Peas, Chinese actress Yao Chen who has campaigned to support refugees and Olafur Eliasson, a Danish-Icelandic artist known for his sculptures, large-scale installations and collaborations with architects.