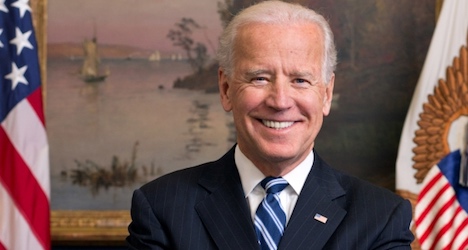 Biden, who flew in on the American government’s Air Force Two jet, was greeted at the Kloten airport by Swiss President Johann Schneider-Ammann and US Ambassador Suzi Levine, among other officials.

The native of Pennsylvania is leading the US government’s delegation to the 46th annual Davos forum, which expects to attract more than 40 heads of state, as well as 2,500 business and society leaders.

On Tuesday afternoon in Davos, Biden is set to promote his “moonshot” initiative to speed up the race for a cure for cancer.

He will be appearing at a meeting bringing together international leaders in cancer research and treatment to discuss ways to advance the fight against cancer, the WEF said.

Biden who arrived in Switzerland with his wife, Jill Biden — an educator and professor — met informally with Schneider-Ammann on Monday, the Swiss government said.

They “exchanged views on the international issues, the close relations between the two countries and cooperation in the field of education,” the federal department of economic affairs said in a news release.

The Swiss president and the US vice president “stressed their intention to strengthen cooperation on vocational education and training”.

Biden's wife, who holds a doctoral degree in educational leadership, participated in the first International Congress on Vocational Education and Training in Winterthur (in the canton of Zurich) in 2014, the federal department noted, adding that this was a starting point for cooperation between the two countries on the subject.

Schneider-Ammann “emphasized Switzerland's strong interest in the state of the ongoing negotiations between the United States and the European Union on the Transatlantic Trade and Investment Partnership (TTIP),” the department said.

He “stated that Switzerland was counting on the possibility for third countries to be able to join the partnership, if appropriate”.