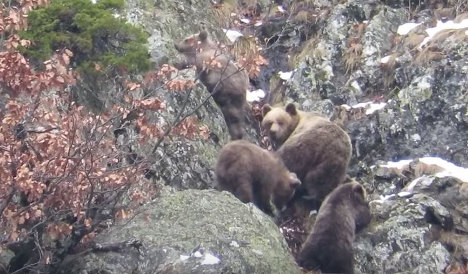 Warmer than average temperatures in Spain this winter have caused bears living in the Pyrenees mountains in Catalonia to wake up and postpone their hibernation, according to the regional Department of Territory and Sustainability.

The department reported on Wednesday that a team of scientists monitoring bears in the mountains recorded video of a mother bear with three cubs roaming around looking for food as recently as Tuesday.

“At this time of year, the whole family should be hibernating inside of a cave,” the sustainability department wrote.

The mother, known as Caramellita, had been known to the researchers since May 2014.

In the video, the bears can be seen scaling a mountainside, probably in search of acorns on the ground near the village of Lladorre, according to the report.

The report said that it seemed the mild temperatures and little snowfall had made the bears decide to delay hibernation.

“It is possible that they may have started to sleep, but due to favourable weather conditions and the availability of food, they woke up and came out to eat and walk,” the department stated. “When it definitively starts to snow, they will begin their hibernation again.”

And the snow is expected to fall quite vigorously in mountainous parts of the country, according to an alert by Spain's Commission for Civil Defense and Emergencies on Thursday.

The commission reported that both Cantabria and Navarra in the north were expected to experience “heavy snowfall” of up to 20 centimetres. The Basque country, northeast Catalonia and León could also see such snowfall on Friday.

“If you're going to drive, especially in mountainous areas, inform yourself about the weather conditions and the status of the roadways,” the commission advised. “Always bring snow chains or mountain tires, a full tank of gasoline and don't forget to bring your cell phone with its charger.”

The warmer temperatures so far this winter have also prompted almond trees to bloom too soon, raising concerns about climate change, experts said this week.