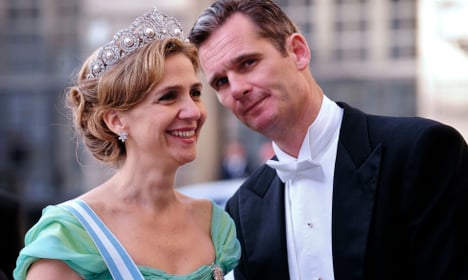 One of the accused in a historic trial that starts Monday in Majorca, Cristina will find herself in the dock on the very Mediterranean island where she once used to holiday in style.

The 50-year-old sister of King Felipe VI is going on trial – the first ever member of the Spanish royal family to do so – in a corruption scandal that has outraged Spaniards the country over and contributed to her father's abdication in 2014.

And her fall from grace could hardly be more dramatic.

After a fairy-tale marriage to tall, dashing Olympic handball player Inaki Urdangarin in 1997, Cristina became a darling of the celebrity press and won praise for having a salaried job.

Her husband, who became Duke of Palma upon their marriage, was part of the Spanish Olympic handball team in 1992 in Barcelona and then in 1996 in Atlanta when the squad won bronze.

The team would go on to win a second bronze in 2000 in Sydney with the duke as their captain.

But then in 2011, Urdangarin was put under investigation for allegedly misappropriating public funds through the Noos charitable foundation he chaired, and charged with embezzlement, influence peddling, fraud and money laundering.

Cristina, who studied in Madrid and has a masters degree in international relations from New York University, is also in the dock for suspected tax fraud.

“She fell madly in love with Inaki, a tall, blond guy with blue eyes, in a country where people are normally dark-haired, small, with black eyes,” said Jaime Penafiel, a royal affairs journalist.

“And despite all his alleged offences and infidelities, she remains in love, ready to accompany him to prison – otherwise she would have divorced like her father and brother demanded.”

The scandal saw the popularity of the royals plunge and was part of the reason why King Juan Carlos, widely respected for guiding his country from dictatorship to democracy in the 1970s, was forced to abdicate the throne in 2014 in favour of his son Felipe.

But that was not enough for outraged, crisis-hit Spaniards, and the new king later stripped Cristina and her husband of their titles as Duke and Duchess of Palma.

Ana Romero, author of a book on the end of Juan Carlos's reign, says Cristina has had a lot of trouble accepting what happened to her.

“It's huge. Since 2011 her and her husband have (publicly) disappeared from the royal family, and their expulsion from paradise was perhaps all the more painful that it happened gradually.”

Cristina's little brother, with whom she was once very close, did not even invite her to the most important event of his life – his proclamation as King Felipe VI in 2014.

Intelligent and sporty, Cristina famously became Spanish royalty's first woman to get a degree after studying politics in Madrid's Complutense University where she attended class with a bodyguard.

A keen skier and sailer, she also represented Spain on the sailing team at the 1988 Olympics in Seoul.

But already in 2004, the couple's purchase of a 1,200-square-metre (13,000-square-foot) house for six million euros ($6.5 million) in Barcelona had raised suspicion, with centre-right daily El Mundo asking: “Where is the money coming from?”

And when the Noos case came to light just as an economic crisis ravaged Spain, Romero says the once beloved couple “became… 'the baddies in the film', selfish and hedonistic.”

Now living in Switzerland away from the Spanish media glare, the infanta works for a charitable foundation run by La Caixa bank.

Cristina's lawyer once argued she is innocent of the accusations.

“When one person is in love with another, she trusts, has trusted and will carry on trusting that person come hell or high water,” Jesus Maria Silva said in January 2014.