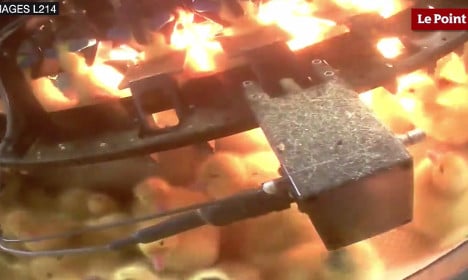 Shocking video footage filmed secretly inside a duck hatchery in France is promising to reignite the debate around the ethnics of eating foie gras.

A recent survey showed the French are still in love with foie gras at Christmas time, but the video footage taken by organisation L214 might change a few minds.

The images claim to show how males and female ducklings are separated on the first day of their lives, before the male birds have their beaks snipped by white hot metal.

The ducklings are then seen being packed on to a carousel with flashes of flames every few seconds as the beaks are apparently snipped.

In the most disturbing scene the females are apparently killed in a giant masher, although many continue to show signs of life once they come out the other side.

The video which readers may find distressing is below.

“We want consumers in France to know exactly what happens in the process of making foie gras,” L214’s founder Sébastian Arsac told The Local. “After that it’s up to them what they do.”

Foie gras is made from the fattened liver of ducks and geese.

The organization L214 has long highlighted the controversial process of gavage – or force feeding – that goes into making the product.

But with the new images, filmed by an employee at the hatchery in the Pays de la Loire region, the organization wanted to highlight part of the process that consumers may not have known about.

The beaks of the ducks are snipped to avoid them injuring each other during their short time in the hatchery.

According to L214, the male ducklings are kept inside for 40 days, then allowed outside for a similar time. The force feeding then begins after 80 days, with each duckling fed twice a day for 12 days, before being sent to the abattoir.

They will take in around a kilo at a time or around 25 percent of their body weight, the organisation claims.

“We wanted to show how female ducklings end up in the masher on the first day of their lives,” he said.

“On the day the images were taken, 6,000 of them were killed. And it’s simply because their livers are a little bit smaller than the males and therefore don’t make as a good foie gras.

The images, first published by Le Point news site, come at a time of year when the French are gobbling foie gras by the kilo.

Surveys produced this week showed the controversial delicacy, whose production is banned in many countries, is the nation’s favourite Christmas dish.

“We understand that it’s a product that has a strong place in French culture. Many French people don’t actually want to eat it but there is a certain social pressure that makes it hard to say no.

“The foie-gras industry is also very powerful, but the way it is advertised on television makes it look like it grows on trees.”

“After viewing these images you can make you mind up in a few seconds as to whether this pleasure is right.”