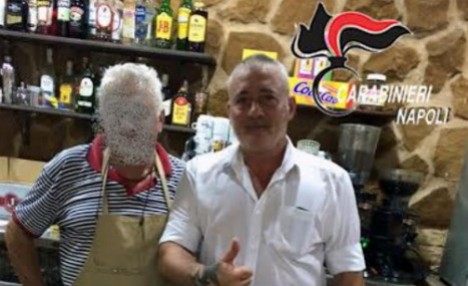 Officers on Wednesday arrested 44-year-old Pasquale Brunese who is originally from Naples, home of the Camorra, one Italy's biggest mafia groups, a local police spokesman said.

Brunese was detained in May 2007 in Italy for possession of cocaine and heroin but the authorities lost track of him.

He was then sentenced in absentia to nine years and nine months in jail for drug trafficking, extortion and membership in an organized crime group.

Italy issued an international warrant for his arrest and has requested his extradition.

He was tracked down at the A Mi Manera restaurant, where he worked as a waiter under a different name.

Brunese will on Friday appear before Spain's top criminal court, the Audiencia Nacional.

Spanish police announced last week they had detained one of Europe's most wanted drug lords, 44-year-old British national Robert Dawes, in his luxury villa on the Costa del Sol after an eight-year probe that allegedly linked him to the Italian mafia and South American cartels.