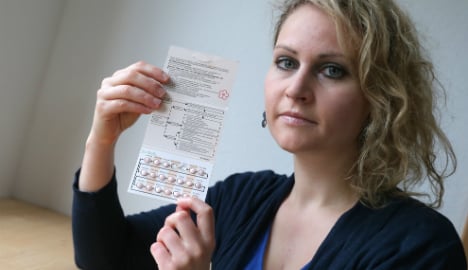 Felicitas Rohrer poses with a package of the contraceptive medication Yasminelle. Photo: DPA

The accusations against Bayer's contraceptive pills Yasminelle and Yaz, based on drospirenone, are not new and the company has already paid out nearly $2 billion (€1.8 billion) to around 10,000 women in out-of-court settlements in the United States to avoid long and costly trials.

But Rohrer's case, which opens on Thursday, is highly symbolic in the company's home country of Germany, where Bayer, maker of Aspirin, stands as a beacon for the domestic chemicals and pharmaceuticals sectors.

Rohrer is suing the company for €200,000 euros in damages and interest.
But “the money cannot compensate for what I and other women have gone through,” she told AFP.

“What I really hope for is justice,” she said in her home in Willstaett, not far from the French-German border, adding that her hope is for Yasminelle to be withdrawn from the market.

At the age of 31, and following a pulmonary embolism – a blockage of the lung's main artery – Rohrer now has to take an anti-coagulant that significantly reduces her chances of having a baby.

She suffers from shortness of breath and is forced to wear anti-embolism compression stockings on car journeys of any length.

She studied to become a vet but now works as a journalist because she is not allowed to carry any heavy loads.

It was in June 2009 that Rohrer, hitherto a perfectly healthy young woman, suddenly collapsed. Her heart stopped for 20 minutes. And in an emergency operation, doctors found massive blood clots clogging her heart.

“The doctors couldn't believe that a 25-year-old woman could suffer from a pulmonary embolism,” she said.

And the doctors clearly pointed the finger at the pill.

The self-help group Rohrer has since set up has collected testimony from around 250 women who suffered similar side effects.

She is the first person in Germany to sue Bayer over the drug, accusing the company of not informing patients sufficiently about the risks associated with Yasminelle.

The trial opens on Thursday in a court in Waldshut-Tiengen near the Swiss border.

Bayer – which sold 768 million euros worth of the Yasmin group of contraceptive pills in 2014, compared with total overall group sales of 42 billion euros – rejects the accusations as “unjustified”.

It insists the pills have a “positive” risk-benefit profile and are approved by every national drug agency.

So far, the courts have agreed, notably in a case brought against Bayer in Switzerland.

In France, where Bayer has already been the target of a number of other high-profile cases, health insurers have halted reimbursements for the pills, hitting group sales there.

A German medical journal claims that there has been a drop in the number of women admitted to hospital with pulmonary embolism in France.

Taking the pills “increases the risks and women should be aware of that,” said Yana Vinogradova, a scientist at Nottingham University in Britain.

Nevertheless, “the risks remain low, lower than those connected to pregnancy,” she added.

One of the leading public health insurers in Germany, Techniker Krankenkasse, expressed alarm in a recent report about the “predominance of high-risk pills” on the market.

“There is a lack of information on the part of the doctors and the pharmaceuticals industry,” said Gerd Glaeske, pharmacologist and co-author of the report.

He said he viewed the lawsuit filed by Rohrer as “an important symbol”.

All the more so, because Yasmin, with its anti water-retention effects, means patients are less likely to gain weight, Glaeske said.

It is “the first pill that has a very clear marketing angle on beauty and well-being,” opening the way for boasts that contraceptive pills are effective in fighting acne, for example, he argued.

In the meantime, in the United States, Bayer is also the target of a growing number of lawsuits against another of its contraceptive products, the implant Essure, which women complain has caused them pain and severe bleeding. 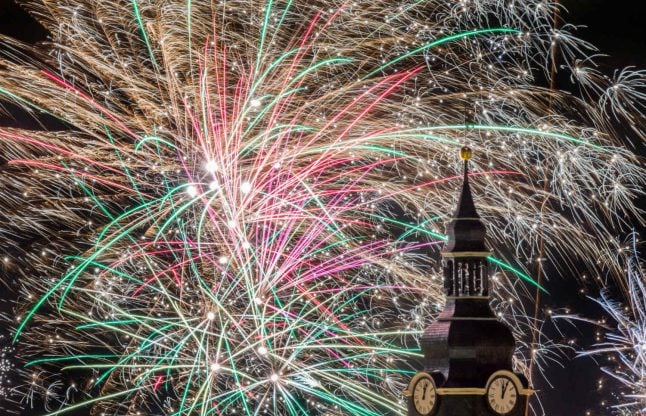 Anyone who has spent 'Silvester' (New Year's Eve) in a German city will know that Germans love fireworks although recently, the issue of fireworks has been somewhat controversial, with some regions even considering a ban.

Germany is on the whole a pretty sensible country, but when the calendar rolls round to December 31st, something seems to change in the population and people go crazy for pyrotechnics.

This rings especially true in the capital, which many locals describe as a war zone come December 31st. Especially in the centre of the city, explosions ripple throughout the streets, which has led to several injuries in recent years and a ban on Böllern
(or firecrackers) in some zones.

People staying at home or hosting house parties often go all out with their own private firework displays, and you are sure to be surrounded by bangs and flashes from sundown to the early hours.

What's more, wherever you walk on the 31st, people are setting off rockets from beer bottles, throwing firecrackers into the street and generally being every fireman's worst nightmare.

The cause of this may be because this is the one time of year people in Germany can actually get their hands on fireworks.

Whereas small fireworks can be sold to people in Germany all year round, stores are only allowed to sell larger fireworks – the kind you're likely to set off on Silvester – between December 28th and December 30th. The rest of the year you can only get them from certain licensed sellers.

What's more – you're only really allowed to set off fireworks yourself between the 31st of December and the morning of the 1st of January.

If you set them off any other time, you're likely to get in trouble with the police, or worse, your German neighbours.

But do not fear, firework lovers – there are ways you can get your fix during the other 364 days of the year.

If you're organizing an event at another time – such as a wedding or 50th birthday party – that just wouldn't be complete without a few Catherine wheels, you can ring your local law and order department to request official approval for a private firework display.

There are also a huge number of spectacular professional firework displays and competitions you can attend every summer across Germany such as the Rhine in Flames, the international firework competition in Hanover, Neckar River and Heidelberg Castle illuminations and fireworks – to name but a few.

Fireworks are divided into categories, or 'Klasse', depending on how much explosive they contain. This essentially means the bigger the bang, the harder they are to get a hold of.

Klasse 1 are the smallest and least explosive kinds of fireworks and can be bought by anyone over 12 years of age. These kinds of fireworks can also be bought and set off all year round. They are essentially pretty harmless, for example sparklers, table fireworks like small fountains for cakes, and bangers that just make a pop when thrown at the ground.

Klasse 2 are the kind of fireworks you are likely to be setting off in your backyard this New Year's Eve and you must be an adult and show ID to buy them. According to German law, Klasse 2 fireworks should not be launched in the immediate vicinity of hospitals, churches or old people's homes. Apart from around these locations, you're free to set off as many Klasse 2 fireworks as you'd like on December 31st. The rest of the year you will need to get a permit first before staging your own pyrotechnic display.

Klasse 3 are display fireworks meaning they are a little bigger, brighter and louder than what you'll find on sale in the supermarket. While it would be fun to have these at your Silvester party, they can only be bought by people with an official § 7 or §27 SprengG license which you can apply for at your local occupational health and safety office.

Klasse 4 are professional grade fireworks and can contain an unlimited amount of explosives. Only professional pyro technicians can get their hands on these and for good reason, as they are definitely not something you want being set off on your patio.

A huge number of department stores and supermarkets sell fireworks between the 29th and 31st of December each year.

This year, since the 29th falls on a Sunday, the sale of fireworks will begin on Saturday 28th December.

The Zoll, the German department for customs and imports, recommends that you buy your fireworks from a store rather than any kind of street vendor or the internet as store-bought fireworks are tested and must follow specific safety standards.

All fireworks sold in Germany should be in line with legal requirements but sometimes unofficial vendors manage to get their hands on illegally imported fireworks, which may not be up to standard. If you're unsure it's best to check that the box is labeled either Klasse 2 or Klasse 1 and has the word 'BAM' followed by a number.

Fireworks and New Year's Eve go hand in hand but unfortunately this tradition comes with some less positive consequences. As well as the huge number of burns which people incur every year, fireworks also release large amounts of pollutants into the air which are harmful to the environment and can cause respiratory and circulatory problems.

After Silvester celebrations end, there are reported spikes in pollution levels in Germany. After celebrations in 2016, firework displays ejected 4,000 tonnes of particulates into the atmosphere which is equivalent to 15 percent of the yearly vehicle particulate emissions in the country.

Levels of pollution in the air around Germany were up to 26 times higher than the EU's recommended amount. The worst reading came from the centre of Munich where levels of particulates reached 1,346 micrograms per cubic metre of air, compared to the recommended 50 micrograms.

While it is undeniably a lot of fun to be the one launching the rockets, a more environmentally conscious alternative could be to head to a professional display instead.

Think of it as the firework equivalent to travelling by train instead of by car – it's comparatively better for the planet and you don't have to worry about causing an accident if you're not paying attention – so you can just sit back and enjoy the ride. Berlin is the place to be on New Year's Eve if you're looking for a spectacle. The city is often featured on top 10 Silvester celebration lists and the Brandenburg Gate hosts the biggest street party in Europe on the 31st, complete with DJ's, food stalls, rides and of course an incredible firework display at midnight.

In Frankfurt, a great place to stand at midnight is on the banks of the river, where you can have a wonderful view of the fireworks being set off all over the city and reflecting in the water.

Wherever you are in Munich at midnight on the 31st, you are sure to see a lot of fireworks as the official displays in the city are accompanied by a lot of people setting off their own in the streets.

This article was updated in December 2019.