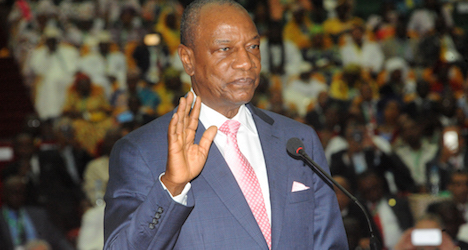 In a ruling made by the Bellinzona court last month and released on Monday, it rejected an appeal made by Steinmetz to overturn a decision made by Swiss justice authorities to send the documents to the US.

Steinmetz, 59, is not mentioned by name in the court’s decision and is referred to as “A.”

But French media outlets Le Monde and Mediapart, as well as the Berne Declaration, a Swiss NGO, have identified him and associates in linked companies as being the target of a US probe into an alleged corruption and money-laundering case involving the acquisition of mining property in Guinea.

The criminal court noted the US Department of Justice made an official request for help from Swiss authorities into the case.

Steinmetz, an Israeli citizen who lives in Geneva, is alleged through one of his associates to have made payments and given gifts starting in 2006 to the wife of Lansana Conté, the former president of Guinea.

According to the US demand for judicial aid, these payments and gifts were made in return for her assistance in obtaining mining rights in one of Africa’s poorest countries.

Earlier media reports said that Benny Steinmetz in 2008, just before Conté’s death, obtained rights through one of his companies to the Simandou iron mine after it had spent $165 million exploring in the area.

Business magazine Forbes, which estimated Steinmetz's wealth at $1.6 billion, reported online that Steinmetz had obtained the mining rights for free after Conté stripped them from Australian mining giant Rio Tinto.

In 2011, Guinea’s first democratically elected president, Alpha Condé, launched an investigation into the mining contracts concluded by his predecessors, which led to the discovery of the “heist of the century”, implicating Steinmetz, according to Bern Declaration.

Steinmetz has denied the accusations, which caused widespread anger in a country where millions live in poverty, but Condé has stripped Steinmetz's company BSG Resources of rights to the iron ore.

In a 2013 interview with French-language newspaper L’Opinion, he accused the current Guinean leader of “leading a campaign of disinformation”, intended to soil his reputation and that of his company.

The American interest in the case relates to the fact that alleged bribery payments were made to a bank account or accounts in the US.

Among the documents being sought are those seized from Steinmetz’s home and his private jet, the ATS news agency reported.

In August 2013, police in Geneva seized documents during a raid of the offices of Onyx Financial Advisers, which was providing management services for a company linked to Steinmetz.

Police in France, meanwhile, seized documents from the home of one of Steinmetz’s associates living in a French community near Geneva.

The criminal court rejected all of the arguments advanced by Steinmetz’s Geneva lawyer, Marc Bonnant.

Last month, the Swiss supreme court released another decision approving the transfer of the same documents sought by the US to justice authorities in Guinea, ATS reported.

The Bern Declaration on its website said Steinmetz has built an “extremely complicated web of companies, which he controls from Geneva” but includes entities based in various tax havens, including Guernsey, the British Virgin Islands and Liechtenstein.

“This sophisticated structure enables him to diminish his legal responsibilities and optimize his taxes,” the NGO said.