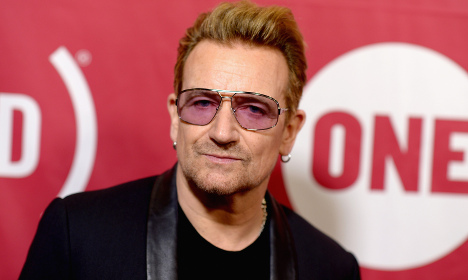 In an interview for CNN, Bono recited lyrics from a new song called "Streets of Surrender" that touched on the Paris violence. Photo: Dave Kotinsky / Getty / AFP

The Irish rock band cancelled their shows in Paris earlier this month in the wake of the attacks on November 13 that left 130 dead.

But they quickly rescheduled them and are due to appear at the 16,000-capacity AccorHotels Arena on Sunday and Monday.

“We think of music as the sound of freedom,” said guitarist The Edge, in an interview with CNN.

“We think rock and roll has a part to play, so going back to Paris to us is not just symbolic. I think we're actually starting the process of resistance, of defiance against this movement,” he said, referring to the Islamic State group that carried out the attacks.

In the same interview for CNN, Bono recited lyrics from a new song called “Streets of Surrender” that touched on the violence.

He said he had started writing the song for Italian singer and long-time friend, Zucchero.

The lyrics include the lines: “Every man's got one city of liberty, for me it's Paris, I love it.

“Every time I get lost down these ancient streets, I find myself again. I didn't come here to fight you. I came down these streets of love and pride to surrender.”

The song also touches on the refugee crisis, with a lyric mentioning the young Syrian boy photographed dead on a beach earlier this year: “Everybody's crying about some kid that they found lying on a beach, born in a manger.”

The worst of the violence took place at the Bataclan music venue, where 90 people were killed during a gig by the Eagles of Death Metal.

Rumours have been circulating in the music press that the band will join U2 on stage in Paris for at least one of their shows, though neither camp has yet confirmed the appearance.

Bono told CNN that the Islamic State's ban on music was perverse.

“Think about the idea of outlawing music. A child sings before it can speak. It's the very essence of our humanity,” he said.

Bono and The Edge are both francophiles who share a house in the south of France, and there are rumours the singer also has a home in Paris.

“It seemed like the target was culture and every kind of expression of the best of humanity: great music, restaurants, French food — everything that we hold dear,” said The Edge of this month's attacks, which hit several restaurants and bars as well as the Bataclan venue.