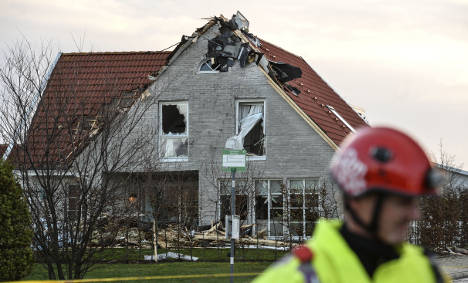 A house destroyed by the storm in Helsingborg, southern Sweden. Photo: Johan Nilsson/TT

A massive clear up operation is underway in parts of the country hit by Storm Gorm, one of the most powerful weather systems to hit Sweden in years.

After moving north from Denmark over the weekend, the wild weather pulled down trees and power lines across the south of the country, while residents reported damaged roofs and cars.

“We’ve had everything from chimneys that have become loose and blown down to roofs that have come off and barns literally torn up from the ground,” Johan Wallin, a spokesperson for the emergency services in Halland told the TT news wire.

“There will be many more phone calls when the electricity comes back; we’re learning there are many trees lying around the county,” he added.

According to TT, approximately 9,000 people experienced problems with their fixed phone lines and several mobile networks also faced disruption during the worst of the bad weather. A total of 75,000 people are believed to have lost power over the weekend, with energy companies suggesting it could take several days to restore some services. However by mid-morning on Monday it was estimated that only 20,000 people were yet to be reconnected.

A camp for asylum seekers in Revingehed in Skåne was among the places damaged in the chaos, with five out of six tents collapsing during the windy weather. Refugees had not yet moved into the temporary accommodation but staff working on the project said that Storm Gorm's impact could further delay their arrival.

“They were not completely destroyed, but this has certainly had an impact,” Britta Ramberg, operations manager for the Swedish Civil Contingencies agency MSB told TT.

The winds calmed down before the morning rush hour got under way, with the Öresund bridge, which connects southern Sweden and Denmark, reopening. It was closed at around midnight after wind speeds in the area topped 32 metres per second.

IN PICTURES: Southern Sweden in grip of Storm Gorm

Train services over the bridge were running again by 7am, although those travelling in more rural areas of southern Sweden were told to expect delays and cancellations throughout the day, due to fallen trees and debris on local lines. Some schools and offices in the worst affected areas remained closed.

However are no reports of any serious injuries in either Denmark or Sweden as as result of the storm.

Storm Gorm was named by Denmark’s weather agency DMI according to an international convention by which storms are named in alphabetical order, alternating between boys’ and girls’ names. Freya, the last big storm to hit Scandinavia, came in early November.

Have you been affected by Storm Gorm? Post your experiences in the comments section below