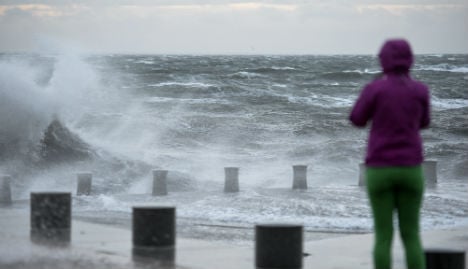 A woman watches Storm Egon from Malmö's Västra Hamnen district. Photo: Jonas Nilssen/TT
Sweden’s SMHI weather forecaster on Sunday had class one warnings for the coast of Kalmar and for the waters of The Sound off the southeastern tip of Skåne.
“It will blow a lot, both onshore and offshore,” Charlotta Eriksson, SMHI meteorologist told Expressen newspaper.
The Swedish Transport Administration has warned of high winds over the Öresund Bridge to Copenhagen from about 7am on Monday morning.
The storm has been christened Gorm by Denmark’s DMI according to an international convention by which storms are named in alphabetical order, alternating between boys’ and girls’ names.
Freya, the last big storm to hit Scandinavia, came in early November.
The storm is beeing powered by a large area of low pressure, moving against the West of Sweden.
Denmark is expected to get the worst of the storm, with the West coast of Jutland seeing hurricane strength winds, and town’s aroud the Limfjord seeing water levels surge by two meters.
According to Denmark’s Ritzau news agency, a tent camp for asylum seekers in Thisted, North Jutland, was evacuated yesterday in anticipation of the storm.