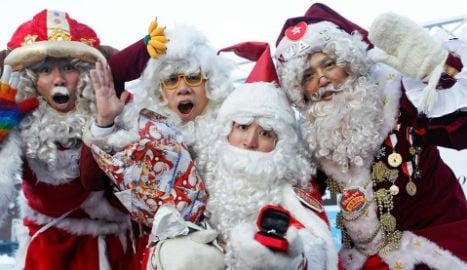 Santa Apple posing with the ring with which he proposed. Photo: Gustav Hansson (www.gustavhansson.com)
Santa Apple, whose real name is Xiaojie Qi, beat four rivals to the prestigious title at the Santa Winter Games 2015 in Gällivare, 100km north of the Arctic Circle.
Xiaojie’s opponents included Santa Christine from Germany, Santa Jim from China, Santa Möre from Sweden, and last but not least, Santa Yamashita from Japan, who won the contest last year.
Contestants were tested on Santa skills, including reindeer-lassoing, kick-sledding, porridge-eating, parcel-stacking, and a Christmas tree relay.
Hong Kong's Santas have been a force to reckoned with in the contest ever since the 44-year-old magician Jimmy Chan swept to victory in 2009, something he put down to his “cheerful attitude”.
Since then, helped, according to the Wall Street Journal, by generous funding from a major property developer, the city has placed its Santas in the top three contestants every year, with each entrant going through a gruelling 10-day boot camp before the contest.
After winning on Saturday, the jubilant Xiaojie, who is 21, proposed to his girlfriend back in Hong Kong through a TV crew sent to cover the event.
Yamashita, widely seen as a favourite in the run-up to the contest, slipped on the ice during the parcel-stacking round and had to be taken to hospital, returning sad-faced to his hotel after the contest was over.