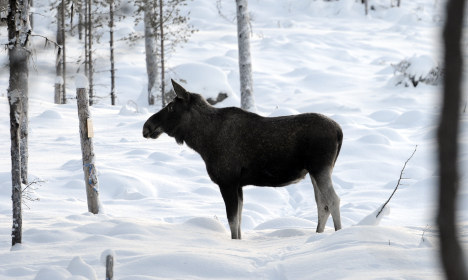 Klas Persson was alerted to the struggling animal while he was out hunting with his son David on Sunday.

He told regional newspaper Västerbottens-Kuriren – which broke the story on Monday – that their dog had started barking strangely and led them to the elk.

“We thought the dog had got stuck in the ice, but when we got closer you could see that an elk was down in the river,” he said.

After realizing that they would not be able to rescue the animal alone, they sought help from a friend and his son who live in a neighbouring village.

The new additions to the team tried to reach the animal by crossing the frozen river using a snowmobile, but were unable to get close enough to haul it out, the newspaper reported.

Persson said that the elk looked like it had “slept for a long time and had no energy”, but he explained that the animal then clocked that the men were trying to help him, and mustered up the courage to start swimming.

“The moose was so wise that it understood that it could be helped by man, it was a great experience of nature to see, it was impressive to see how it swam towards us,” he said.

The group then managed to cut chunks out of the ice with a chainsaw in order to create a safe passage for the animal.

According to Persson, the elk looked “angry” when he emerged from the water and the northern Swede said he had found it “impressive” that the animal wasn’t shy around his rescuers.

He said that the animal initially looked “a little wobbly on his feet” but soon trotted off into the forest.

Persson explained that despite being out hunting at the time of the rescue, he felt no desire to kill the animal for his meat.