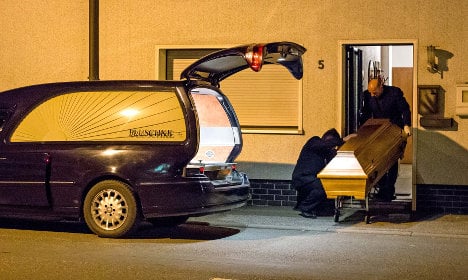 One of the bodies being removed from the property. Photo: DPA

The woman had been detained on Friday, suspected of killing the children, police in the southern state of Bavaria said in a statement.

The woman said she was the mother of some of the babies, and admitted to killing some of them, the dpa news agency reported, citing a police spokesperson.

The woman's partner, 55, who had been arrested at the same time, has been cleared and set free, police said.

The investigation is ongoing and an autopsy is to be performed on the babies.

Police in the small town of Wallenfels were alerted Thursday by a resident who found an infant's body in the apartment.

When officers arrived at the apartment they uncovered several other bodies, wrapped in hand towels and placed in plastic bags.

In May, a woman was sentenced to 44 months in prison for killing two of her children and hiding them in a freezer.

In October 2013, also in Bavaria, construction workers found the bodies of two babies who had been dead since the 1980s.

And in 2008, a 42-year-old woman was convicted of killing eight of her newborn babies, then hiding their bodies in buckets, flower pots and an old fish tank.