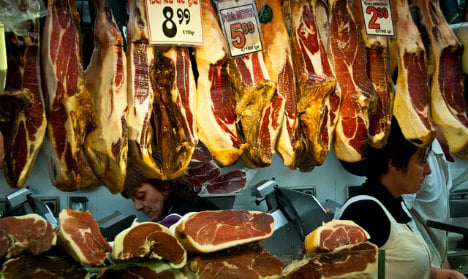 Jamón is a national obsession in Spain. You cannot go very far without coming across it, whether it’s hanging from a ceiling by its trotter, served up in deliciously thin slivers alongside a glass of vino or chopped up and strewn among a plate of vegetables.

So when the WHO issued a health warning this week that carcinogens were present in certain types of meat, including the beloved jamón, I almost expected Spain to declare a state of national mourning. One of the images being shared on social media this week

However, Spaniards have taken the news that their daily staple could be as dangerous to their health as cigarettes, plutonium and asbestos, completely in their stride to the point of ignoring the warnings entirely or treating the whole issue as a joke.

Initially, there appeared to be collective denial that the warning even included jamón with Spain as a whole accepting that, while processed meat might well be dangerous, the study couldn't possibly include ham, naturally cured in mountain air from the lovingly reared, free-range acorn fed piggies.

WATCH: Are Spaniards ready to give up cancer-causing jamon?

Spain’s jamón producers were incredulous about the report and swiftly dismissed the danger.

“It’s ridiculous to put jamon serrano in the same category as a processed hamburger,” lamented Ricardo Mosteo, head of the Designation of Origin (DO) board for the ham producing region of Teruel.

“In fact there are so many studies that show the health benefits of jamón, even for pregnant woman.”

Well those in the jamón trade would say that, ever fearful of the devastating effect that such a warning could have on their industry, which in the sale of ham legs alone is worth €1.5 billion according to a 2014 report from the Spanish Jamón Serrano Foundation (FJSE).

Spaniards devour an estimated 5kgs of serrano ham each over a year, to say nothing of the chorizo, morcilla, lomo and other pig products that form such a large part of the Iberian diet. And yet they have the highest life expectancy in the European Union.

So The Local paid a trip to some of Madrid’s popular jamon serving establishments to see whether attitudes might change.

WATCH: Are Spaniards ready to give up cancer-causing jamon?

Paco Gonzalez, proprietor of Casa Gonzalez, which specializes in quality Spanish products certainly  doesn’t pay much heed to the study.

“Jamón is about as carcinogenic as the air we breathe every day,” he insisted. “The Mediterranean diet is one of the healthiest in the world, and this kind of meat is an important part of this diet.”

Gonzalez, who is the third generation to run a business that started in 1931, stressed that it was eating in moderation that was the important thing, not giving up jamón.

“There is a lot of proof that eating jamón, in moderation, can we really good for you. In fact, jamón iberico has no cholesterol,” he added.

One twitter user joked: “It breaks my heart when I see young people acting this way. Heartrending image.”

Jamon is as much a part of the Spanish tradition as drinking wine or taking a stroll with friends that it is virtually impossible to imagine a Spain without it.

As one elderly smiley jamon-lover told us in the video:

“Ham is good. I really like ham. For everybody!”