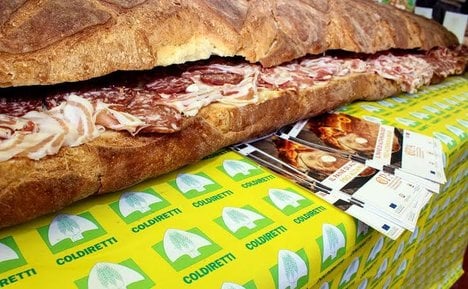 One helluva' sarnie! Italian farmers have made a giant meat sandwich to promote Italian meat following a report on Monday which linked processed meat to cancer. Photo: Coldiretti.

The sandwich, which contained 100kg of meat, was their response to a study by the World Health Organisation (WHO), published on Monday, which said there was a link between processed meat and cancer.

Once completed, the hefty sandwich was a carnivore's dream, measuring over three metres long and weighing an impressive 150kg.

It was made using only the finest Italian ingredients, including a massive crusty cob of Altamura bread which was then filled with slices of artisanal ham, salami and sausage.

While the supersize snack may not be the biggest ever sandwich – a record which is held by a group in Lebanon who made an impressive 756 metre sandwich – it is thought to be the largest sandwich ever made using only ingredients which carry EU quality assurance labels.

The sandwich was completed on Thursday morning Milan's food-themed Expo thanks to the Italian farmers' association, Coldiretti, which represented meat producers from across the bel paese.

“We support genuine Italian products and believe them to be the most healthy,” a spokesperson for Coldiretti told The Local.

“In Italy we have lower rates of cancer and meat consumption than the countries considered by the WHO report. It's important consumers don't just assume all processed meat is bad – it's part of the Mediterranean diet which we know to be healthy.”

Since the report came out, many organizations have expressed their concerns that links between processed meat and cancer could prove devastating for the Italian meat industry.

Italy is home to 40 different types of cured meat that carry prestigious EU quality assurance labels. The pork industry alone is worth €20 billion a year and employs 105,000 people.

After being put together the sandwich was donated to the food bank at Expo and will help feed the needy.