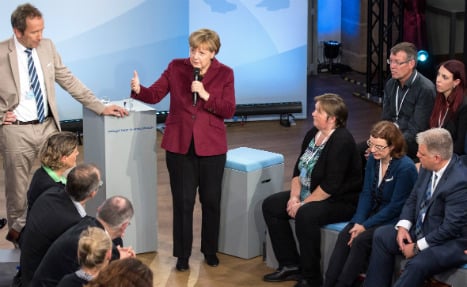 “We are working on it. It's anything but perfect” at the moment, Merkel told a 60-strong audience at a town hall meeting in Nuremberg, Bavaria's second city.

There are indeed “many, many asylum applicants,” Merkel added, “but we are [a nation of] 80 million. We can and will manage this integration.”

Merkel also made sure to address the concerns that critics to her right have raised – many of them in her own party.

“A pensioner must not get the impression that one just has to come from outside [Germany] and then can get a better deal. We have to manage this, otherwise there'll be bad blood,” the Chancellor said.

She added that it was a top priority to deport those whose asylum applications are rejected by the authorities, including around 100,000 people from the Balkan states who have arrived in Germany this year.

SEE ALSO: New asylum law 'to be in force by the weekend'

“That's how those who really need our protection will get it,” Merkel said.

And from day one, it must be said in a “clear and friendly” way what rules apply in Germany, including equal rights for men and women.

But as she pleaded for “as many encounters as possible” between refugees and ordinary Germans, the Chancellor said that “we can also learn something from others too”.

Merkel added that many of those granted asylum in the immediate future will likely return to their home countries in a few years' time.

“According to the [1951] Geneva Convention on Refugees, we are obliged to protect people, but we do not have the job of keeping them here for their whole lives,” Merkel said.