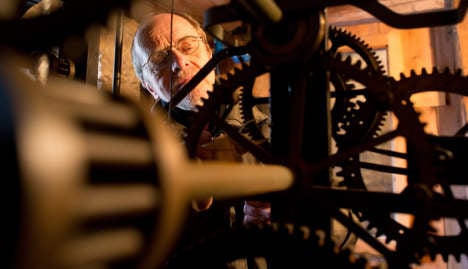 The clock is turned back at the St Jacob Church in Hannover. File photo: DPA

According to its advocates, changing the clocks saves energy, gives us longer summer nights to enjoy and allows us to make the most of the short days in the winter when we work or go to school.

But not everyone is convinced.

Bavarians, for a start, think the whole thing is a waste of time.

Seventy-two percent of the population of Germany's southernmost state would be in favour of abolishing the twice-yearly clock changes, according to a survey published on Thursday – an increase from 69 percent last year.

Reasons expressed ranged from being left feeling run down (81 percent reported this feeling) to lacking concentration (40 percent). Fifteen percent even reported experiencing depressive moods as a result of the time switch.

The Bavarian economy minister Ilsa Aigner has even launched a bid to abolish the twice-yearly tradition, although she acknowledges that scrapping the changes would only make sense if the whole of Europe were to do the same.

But it's not only the somewhat eccentric southerners who feel this way.

The Federal Office for the Environment also deems it unnecessary, arguing that energy saved in the summer is offset by the heating we use when we get up in the dark in winter time.

What's more, some studies have shown that on the Monday after the change to summer time traffic accidents are more likely.

Farmers also complain that animals find it hard to adjust to the sudden change in feeding times.

But on the bright side, on Sunday we can all enjoy an extra hour in bed. And don't forget to change you clock before work on Monday!