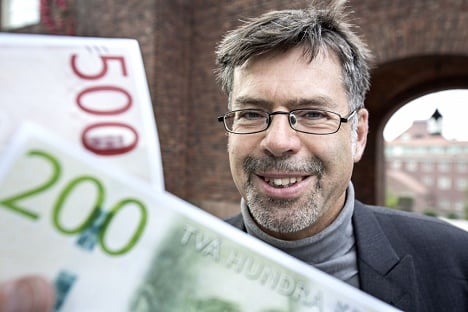 Sweden recently got a brand new set of bills, sporting historical Swedish heroes and looking better than ever. There's also a new 200 kronor note, whereas before it leaped from 100 to 500.

But the new wave of cash is a little ironic, given that Sweden is well on the way to abolishing cash entirely. So why come out with more of it now?

“The decision to bring new notes was made five years ago,” says Niklas Arvidsson, professor at the Royal Institute of Technology who researches cashless society.

He says that there were multiple reasons for renewing the currency, including better security and avoiding counterfeit problems. And despite Sweden's long-lasting love affair with digital payments, Arvidsson says it will probably still be another decade before Sweden is entirely cashless.

But it's already quite close. In Sweden only about 20 percent of store transactions involve cash – compared with 60 to 80 percent in most other countries.

Not even many Swedish banks deal much with cash these days. “Cash carries an increased risk of robbery, and administrative costs,” Arvidsson explains. “The banks which do accept cash require that you explain where the cash has come from, to ensure it is not laundered or financing terrorism.”

At this rate, Sweden may become one of the first cashless societies in the world, according to Arvidsson's research. He recently published a paper studying the Swedish electronic payment system Swish – which he says is one of the largest cash-killers.

Sweden was one of the first countries to join the electronic revolution, launching e-bills and payments, electronic bank accounts, and mobile banking.

“Swedish banks are good at joining advanced IT systems early, and in combination with a very strong IT sector, that has led to multiple competitive financial services.”

Swish is the next development, launched in late 2012.

Stockholm in spotlight for financial tech

“Cash is still an important payment method in many countries, but not here in Sweden anymore,” he says. Today there is some 80 billion kronor in cash circulating in Sweden – but in 2009 that number was 106 billion. And it continues to drop quickly. “

And only about half of that is circulating regularly,” he says.  “The rest is sitting at someone's home or somewhere on the black market.”

In order for a society to truly go cashless, everyone in the society needs to be able to use the new, in this case digital, method. That includes older generations who may not be as familiar with modern technology, as well as those who live on the countryside.

The app Swedish is so simple to use, though, that Arvidsson says it is already conquering the hearts and wallets of cash users.

Another potential challenge of a cashless society faces homeless and paperless migrants: If there is no cash to give, they are (literally) left out in the cold.  But of course there are benefits as well. A digital, cashless society is simpler, more cost-effective, and more open, since transactions are easier to track.

If Swish's popularity continues to grow as quickly as it has, then it could entirely replace cash.

“Swish is like cash in the sense that it is a direct payment which occurs in real-time,” Arvidsson elaborates. “The system's biggest strength is how fast and simple it is.”

Read also: Sweden close to being a cashless society

Currently most Swish transactions are between private users, but stores and online boutiques are starting to try it out. The infrastructure may have to rebuilt to handle the shift to industrial use, but Arvidsson says it probably won't be a problem.

“Swish is already revolutionizing the entire essence of Swedish banking.”

Swish works together with the Swedish bank, Riksbanken, in order to carry out its transactions in real time. And that is a critical aspect of the app's functioning. Without that kind of cooperation it would be impossible – which is why it may be tough to export the Swish model to other nations.

“It's a great idea, but it will take a long time for other countries' bank systems to change from the ground up,” he says.  “But if they figure that out, Swish could lead an international revolution.”

This question will probably have caused some headaches. Fortunately a new private pension product meant to make things easier should soon become available under a new EU regulation that came into effect this week.

The new pan-European personal pension product (PEPP) will allow savers to take their private pension with them if they move within the European Union.

EU rules so far allowed the aggregation of state pensions and the possibility to carry across borders occupational pensions, which are paid by employers. But the market of private pensions remained fragmented.

The new product is expected to benefit especially young people, who tend to move more frequently across borders, and the self-employed, who might not be covered by other pension schemes.

According to a survey conducted in 16 countries by Insurance Europe, the organisation representing insurers in Brussels, 38 percent of Europeans do not save for retirement, with a proportion as high as 60 percent in Finland, 57 percent in Spain, 56 percent in France and 55 percent in Italy.

“As a complement to public pensions, PEPP caters for the needs of today’s younger generation and allows people to better plan and make provisions for the future,” EU Commissioner for Financial Services Mairead McGuinness said on March 22nd, when new EU rules came into effect.

The scheme will also allow savers to sign up to a personal pension plan offered by a provider based in another EU country.

Under the EU regulation, anyone can sign up to a pan-European personal pension, regardless of their nationality or employment status.

The scheme is open to people who are employed part-time or full-time, self-employed, in any form of “modern employment”, unemployed or in education.

The condition is that they are resident in a country of the European Union, Norway, Iceland or Liechtenstein (the European Economic Area). The PEPP will not be available outside these countries, for instance in Switzerland.

PEPP providers can offer a maximum of six investment options, including a basic one that is low-risk and safeguards the amount invested. The basic PEPP is the default option. Its fees are capped at 1 percent of the accumulated capital per year.

People who move to another EU country can continue to contribute to the same PEPP. Whenever a consumer changes the country of residence, the provider will open a new sub-account for that country. If the provider cannot offer such option, savers have the right to switch provider free of charge.

As pension products are taxed differently in each state, the applicable taxation will be that of the country of residence and possible tax incentives will only apply to the relevant sub-account.

Savers who move residence outside the EU cannot continue saving on their PEPP, but they can resume contributions if they return. They would also need to ask advice about the consequences of the move on the way their savings are taxed.

Pensions can then be paid out in a different location from where the product was purchased.

They are regulated products that can be sold to consumers only after being approved by supervisory authorities.

As the legislation came into effect this week, only now eligible providers can submit the application for the authorisation of their products. National authorities have then three months to make a decision. So it will still take some time before PEPPs become available on the market.

When this will happen, the products and their features will be listed in the public register of the European Insurance and Occupational Pensions Authority (EIOPA).

JOBS
EXPLAINED: What is the 13th-month salary in Switzerland and how is it calculated?
Url copied to clipboard!