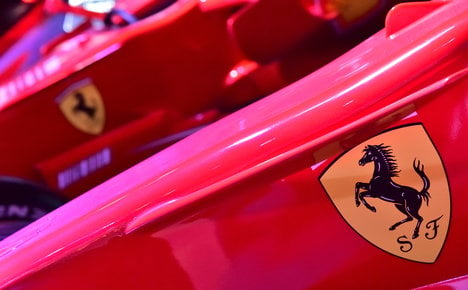 Ferrari is hoping to make a successful start to life on the stock market. Photo:Giuseppe Cacace/AFP

Against a backdrop of reported strong demand for the stock despite the problems other recent IPOs have encountered, Fiat Chrysler has placed nine percent of Ferrari's capital with investors across the globe.

If underwriters take up their maximum options, the number of shares sold will account for 10 percent of the company, valuing the iconic Italian marque at up to €8.7 billion.

The initial public offering is the first step in a complete spin-off process which is central to Fiat Chrysler's plans to invest $48 billion to expand its total worldwide sales to seven million vehicles per year, largely through the development of its Jeep, Alfa Romeo and Maserati brands.

The final pricing of the Ferrari shares, which were offered in a €42 – €48 dollar range, was to be announced in New York on Tuesday evening.

Quoting sources familiar with the progress of the private share placement, Bloomberg reported that demand for a piece of the action had raced ahead of the number of available shares.

That points to a scramble for stock after Ferrari's top executives ring the opening bell on Wall Street on Wednesday morning.

But even a company trading under the ticker RACE cannot be sure of getting off to a flier.

These are uncertain times for corporate fundraising and for an automobile industry reeling from the fallout from the Volkswagen pollution-cheating scandal.

The most high-profile casualty of recent emerging market turbulence was Caribbean Telecoms group Digicel, which was forced to pull its planned New York listing earlier this month. IPOs in the cash-hungry tech sector are also notably down on last year.

The exact level of demand for the new stock will not be clear until Wednesday but analysts think Fiat Chrysler CEO Sergio Marchionne, who is also chairman of Ferrari, has been astute in bringing a restricted number of shares to market.

The strategy mirrors the one Ferrari has deployed with its cars: keeping production tight to preserve their exclusive cachet.

Ferrari shipped 7,255 new cars to its wealthy customers last year and the IPO prospectus envisages only a gradual expansion to around 9,000 a year by 2019.

The flotation will not have any impact on Ferrari's involvement in Formula One racing, in which it is reemerging as a force after enduring a lean period in the slipstream of world champion Lewis Hamilton's Mercedes team.

Ferrari's status as the longest-established and most celebrated team in motorsport's elite championship is vital to the value of its brand.

It also accounts for more than 10 percent of its revenue through sponsorship and related commercial agreements, including licencing of the company's name and famous prancing stallion logo.

The listing will leave Fiat Chrysler with 80-81 percent of Ferrari which the parent company intends to distribute to its own shareholders next year.

Before then Ferrari is due to make a payment of €2.8billion dollars to its parent, increasing the total raised by Fiat Chrysler from the flotation/spinoff to more than €3.5 billion.

At the end of June, the mass carmaker had net debt of €8.7billion due to a combination of Fiat's acquisition of Chrysler and ongoing lossmaking activities.

Piero Ferrari, a son of legendary founder Enzo Ferrari, will retain a ten percent stake after the flotation.