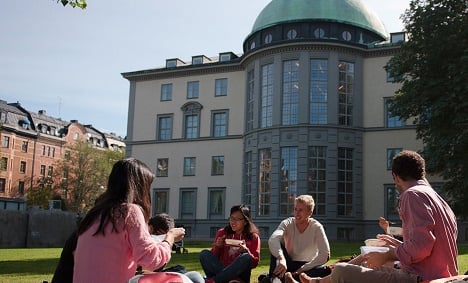 Photo: The Stockholm School of Economics

When it comes to running a company, there’s no substitute for hard work. That’s something Sofia Bertills learned at a young age.

Bertills is CEO of Rapunzel of Sweden, one of Scandinavia's leading hair extension companies. But that's just her latest role – she's had a remarkable career spanning recent positions such as CEO at Bokus, one of Sweden's largest online book stores, and manager at Bonnier's Book Club – Sweden's largest book club. Meanwhile, Lena Flykt-Rosén was winding down her own consulting business in London – after years working as a manager at companies like Accenture and AstraZeneca – and was looking for a change of scene.

“My family relocated back to Stockholm, and I felt I had reached a point in my career where I needed refilling,” she recalls. “I needed new input.”

For six years in a row, Sweden has ranked fourth in the world for gender equality. In fact, in 2014 the country ranked number one for women in ministerial positions, enrolment in tertiary education and women in technical and professional roles.

But Sweden sits outside the top five on measures including wage equality for similar work and for the proportion of women in senior managerial and legal roles.

Of course, there are ways of smashing the glass ceiling – and ways for successful climbers to avoid stepping on the shards beneath their feet.

Both Bertills and Flykt-Rosén actively sought out a change – and both applied for  the Executive MBA programme at the Stockholm School of Economics, a decision which they agree has changed their lives.

“I started looking into doing an Executive MBA when my husband moved back to Stockholm, I realized it was something I really wanted to do,” Bertills recalls. “And I chose the Stockholm School of Economics because of the school’s reputation.”

“I was keen to study, as it’s something I’ve always loved,” says Flykt-Rosén. “And SSE was the obvious choice – the only choice for me, really. I didn’t even look at other schools.”

That’s not to say she wasn’t selective, however.

“I called the admissions office for a chat, and basically ticked all the boxes during that conversation,” she explains. “Having come straight from London, I was looking for a place where I wouldn’t lose the international touch, for one thing.”

The SSE MBA is an intensive 18-month programme conducted in English, based in Stockholm but including international field trips. About one third of participants are women, and many nationalities are represented.

“It was a bit like going back to university, only this time around you could relate everything you picked up in class to real work situations that you had actually experienced. Just being in an environment where everyone is there to learn and build new relationships was great,” says Flykt-Rosén.

“It’s incredibly inspirational to focus on yourself and your learning,” Bertills agrees. “That’s something you rarely get to do.”

The programme includes modules such as Accounting and Finance, Value Creation, Financial Management, and Global Context, preparing participants to handle international business no matter what their field of expertise is.

“There were a lot of engineers in my programme, and I was used to working with creative women but had to deal with male IT people,” Bertills laughs.

“It was very useful to see all the different approaches and learn how to work with different people.”

The participants get to know each other well over the course of 18 months, not just in class  but during group projects outside of class. For Flykt-Rosén who had lived abroad for many years, building that new network was one of the highlights.

“I built some amazing friendships,” she exclaims. “It was probably the single best take-away, the most rewarding part of the programme.”

Of course, there are many challenges as well. Participants in the programme have to have full support from their jobs and be able to take time off during the rigorous course weeks – as there’s no way to juggle the two.

“That was the most challenging part for me, learning to let go of work during program weeks,” Bertills confesses.

She says that for the first few weeks she was trying to handle work during lunch breaks and running to the office in the evenings – but she realized quickly that it was not only impossible, but detrimental to both work and the programme.

“You have to be dedicated,” she says. “If you are constantly checking your emails and phone calls at every break, you aren’t getting as much out of the programme. But that was hard to learn.”

Flykt-Rosén stresses the importance of support – from both bosses and family – to making the experience a success.

“It’s not like you have a generous amount of time to yourself when you’re juggling work and family life. I think most parents struggle with it,” she says.

“But I also think that you shouldn’t be scared about challenging yourself to grow. It’s a real ego boost, to do this for yourself.”

Today Flykt-Rosén is Head of Partnerships at FundedbyMe, and Bertills is thriving in her position at Rapunzel.

And while their time as MBA students ended a few years ago, they both agree they continue to reap the benefits today.

“The MBA is like a toolkit,” Bertills says. “I learned to delegate, to adapt, to structure innovation, and to embrace different leadership styles. It’s a checklist. And to this day, it pops up in my head and helps me out when I least expect it.”

“The MBA has given me a great network,” adds Flykt-Rosen.

“It has also equipped me with a solid framework that makes me a pretty well rounded decision maker, I feel confident tackling the most complex challenges. The programme suits anyone who is ready to explore something new in their career.”

This article was produced by The Local in partnership with the Stockholm School of Economics.