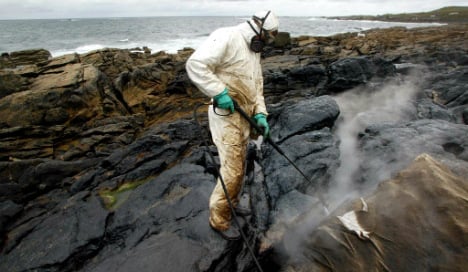 A court in Galicia in 2013 acquitted the ship's captain and chief engineer, both of them Greek, as well as a senior Spanish official, of environmental crimes over the wreck, arguing they did not act intentionally or with serious negligence.

The captain of the ship, Apostolos Mangouras, was convicted only for disobeying Spanish authorities and resisting orders to tow the wreck away from shore before it spilled its load.

Mangouras, who is now 80, never served his sentence because of his advanced age.

When the Prestige broke in two after six days damaged and adrift, the tanker spilled 63,000 tonnes of fuel oil into the sea, coating beaches in northern Spain, France and Portugal with black gunk.

State prosecutor Luis Navajas on Tuesday called the Galicia court decision “flawed” and “notoriously wrong” during an appearance before the Supreme Court.

“The prestige of Spain as a state that defends its coasts and its economic wealth was called into question by this decision,” he added.

Navajas asked that the court void the Galicia court's ruling on the grounds that it did not take into account five key documents.

Among the evidence that he said had been overlooked were notes from the Prestige's former captain, Stratos Kostazos, who had complained that the tanker was in bad shape and who had refused to sail in it.

Navajas also asked the court to order compensation of €4.3 billion ($4.8 billion) for the environmental damage caused by the spill.

In addition to failing to find anyone criminally responsible, the court in Galicia did not find any civil responsibility.

Greenpeace said at the time that the decision provided “a carte blanche to the oil industry to threaten the environment and citizens”.

The Bahamas-flagged Prestige was owned by a Liberian-based company called Mare Shipping and chartered by a Swiss-based oil trader called Crown Resources.