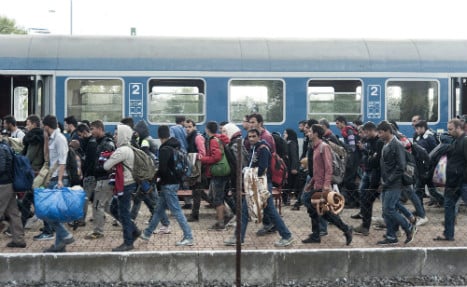 People arriving on a train platform in Hungary from Croatia on September 21st. Photo: DPA

Berlin added Albania, Kosovo and Montenegro to a list of so-called safe countries, so people claiming asylum from those states can be deported more swiftly to free up resources for refugees from war-torn countries like Syria.

Germany's previous open-door policy to Syrians has sparked clashes with some eastern EU member states, in particular Hungary, which has taken a harsher approach and sealed its borders to migrants.

Budapest, which has drawn wide criticism for its hardline approach, on Tuesday went a step further saying it would put forward proposals for global migrant quotas at a UN conference.

The tensions came as the number of migrants arriving via the Mediterranean showed no signs of abating, with the UN refugee agency (UNHCR) saying that 515,000 arrived so far this year.

About half are escaping Syria's civil war, which has topped the agenda of the UN General Assembly in New York this week, and where Secretary General Ban Ki-moon was holding a meeting on the refugee crisis on Wednesday.

As part of that, Berlin said it would give an additional €100 million to improve assistance for refugees in their home regions.

Germany has already committed billions of euros to helping asylum seekers, but with between 8,000 and 10,000 migrants arriving daily in Europe's biggest economy in the past four days, it is now looking to discourage economic migrants from clogging up the system.

“We want to send a clear signal to those (who are not fleeing war), don't come here, you have no chance, you will have to leave our country,” Interior Minister Thomas de Maiziere said.

Berlin will reduce payouts to migrants, and seek to distribute benefits in kind rather than in cash to refugees.

In the first six months of 2015, about 40 percent of asylum-seekers in Germany came from the Balkans, even though their chances of getting asylum was less than one percent.

Europe is also facing a tide of people making the perilous journey across the Mediterranean, where the UNHCR said some 2,980 have perished or disappeared this year.

Highlighting the dangers, the Italian coastguard said it had coordinated the rescue Monday of 1,151 migrants in 11 separate operations off the coast of Libya.

At the other side of the continent, a 20-year-old Iraqi was found dead Tuesday in a lorry near the French port of Calais, crushed by pallets as he tried to reach Britain.

The discovery of the decomposing bodies of 71 people in a truck at the side of an Austrian motorway in August highlighted the dangers faced by migrants trying to get into Europe.

On Tuesday, a Bulgarian court ruled that a 32-year-old man arrested shortly after the tragedy would be extradited to Austria, charged with the negligent manslaughter of migrants plus belonging to a criminal gang.

Many migrants enter the EU through its eastern borders, then travel up through the Balkans and into EU member Hungary, bound for northern Europe – particularly Sweden and Germany.

But the flow of migrants have been disrupted since Hungary closed its borders with Serbia using a razor wire fence, sending people flooding into Croatia, where authorities have been overwhelmed by arrivals.

Budapest has also made it a crime punishable by up to five years in prison to cross the border illegally, while giving the army the right to use rubber bullets on border patrols.

Hungary has faced fierce criticism for its policies but on Tuesday said other countries should do more to help.

“We suggest that all major players should bear some burden. We should introduce some world quotas,” Hungarian Foreign Minister Peter Szijjarto told reporters.

“The major sources of this mass popular movement are countries which became unstable because of international political decisions. They were not made only by Europe.”

But Croatian Prime Minister Zoran Milanovic lashed out at Budapest's handling of migrants as “totally unacceptable” after visiting a migrant centre in Croatia's east.

“They (Hungary) are considering closing border crossings. But how will they stop people? Shoot at them? Deploy the army?” he said, adding his voice to the chorus of criticism levelled at Budapest.