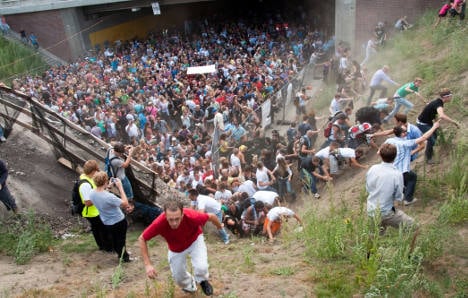 53-year-old Ralf S was attempting to sue events company Lopavent – who organised the 2010 Love Parade – and the state of North Rhine-Westphalia for €90,000 in damages.

His case was the first to reach court since the disaster on July 24th 2010, in which 21 festival-goers were crushed or suffocated to death.

The fire-fighter claimed that since the tragedy, post-traumatic stress disorder had left him unable to work.

But the court ruled that the firefighter's experiences could be regarded as “a typical occupational hazard” for his profession, reports Die Welt.

Mr S fought back against the ruling, arguing that his operation in Duisburg had been like working “in a war-zone.”

It wasn't a “typical occupational hazard” but scenes of horror that he had to experience during the festival, he claimed – experiences which have left him with longstanding psychological problems.

On July 24th 2010, Germany's annual Love Parade took place inside an abandoned freight station that was only accessible via a single ramp.

The venue became a death trap as thousands squeezed onto the entrance ramp, overcrowding the space and causing people to panic as they tried to escape.

Fifteen people suffocated at the scene, while a further six died later from injuries sustained in the crowd. More than 500 festival-goers were injured.