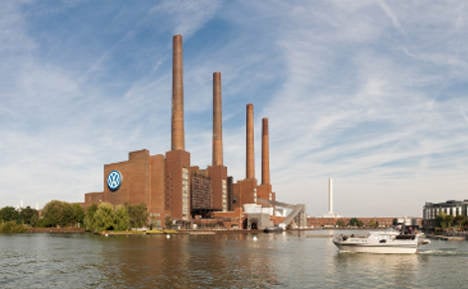 As the German auto giant slides deeper into an emissions cheating scandal, the little northern city home to the group's headquarters is gripped by anxiety and rage.

The Wolfsburg native, a taxi driver of three decades, had himself worked for 13 years at Volkswagen. Two of his children are still employed there.

Underlining the reliance of many in Wolfsburg on the auto giant, Steinbach admits that beyond the ire at the deception carried out by VW, “there is also fear, because it's our bread and butter”.

“Here we say that when Volkswagen catches a cold, we get pneumonia,” said Steinbach, whose taxi is a Volkswagen, as are more than half of the vehicles parked on the city's streets.

And most of his clients are people travelling to and from the VW headquarters.

Wolfsburg's fate became inextricably linked to Volkswagen as early as in 1938, when the first factory building the iconic Beetle opened.

Visitors to the town about 200 kilometres (120 miles) west of Berlin are greeted by a massive version of VW's blue-and-white circular logo at the main rail station, leaving them without doubt that this is Volkswagen town.

In all, 73,000 people work in Wolfsburg for the company across several sites — the administrative headquarters, at the research and development office or the factories where the latest Golfs or Tiguans are made.

Thanks to the corporate giant, the town of 124,000 inhabitants boasts an unemployment rate that is lower than the national average.

But the pollution cheating scandal has also left the town vulnerable.

After the United States announced the probe against Volkswagen, Wolfsburg mayor Klaus Mohrs quickly said that it was “in the interest of the town” for the issue to be cleared up rapidly.

Volkswagen chief executive Martin Winterkorn's resignation on Wednesday made frontpages of German newspapers, but the Wolfsburger Nachrichten went further to ask what would be the financial repercussions on the town's budget.

“The entire population makes money off VW. When it's not going well at VW, they pay less taxes to the town and the town would have less money and would be able to afford less investment. So that affects all of us,” said Angelika Hupetzky, 55, a specialist technician at Volkswagen.

The fear of pay cuts, or worse, job cuts, was palpable.

And it's not just for those who work directly for Volkswagen, like Hupetzky and two of her children. But also others who work for concessions or suppliers of Volkswagen.

At Autostadt, a theme park dedicated to cars, spokesman Tobias Riepe said there has “not been any changes” in visitor numbers since the scandal broke.

The theme park, a subsidiary of Volkswagen, attracts more than two million visitors a year.

Nevertheless, the director of Autostadt, Otto Wachs, told the park's 1,000 employees that they “will convince the public and customers of the quality of its products despite this difficult phase”.

Wolfsburg residents just want the nightmare to be over.

“I don't think that Volkswagen would be the only one” to cheat, said retiree Achim Schoenebrunn, 59, adding that he believes that “everything will work out eventually”.

But Wolfgang, 63, who would not give his family name, said the risks were palpable for everyone in the city.

“If Volkswagen leaves or does badly, Wolfsburg will become a ghost town,” he said.