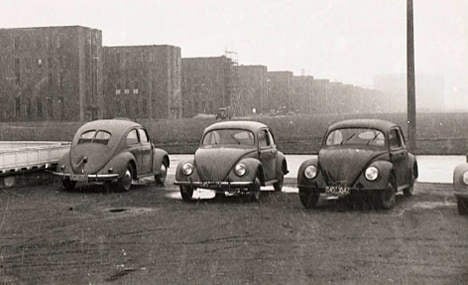 The Volkswagen factory in Wolfsburg in the 1940s. Photo: Volkswagen archive

When Major Ivan Hirst arrived in Wolfsburg – the home of Volkswagen cars – he was less than impressed with what he found. The streets were overgrown and potholed. The small population lived in barracks.

And the Volkswagen factory was even worse.

“A disgusting smell hung over the whole property,” Hirst later recalled. “All the drainage systems had been damaged in Allied bombing and hadn't been repaired. The toilets were broken and completely unhygienic. It was awful!”

It was August 1945 and Hirst – a 29-year-old major in the British Army – had been assigned the task of dismantling the factory by his military superiors. Germany was to have no industry worthy of the name, allied commanders had decided.

But Hirst saw enough potential in the town and its sole source of income to try and save the plant.

He had himself worked as an engineer during the war and had been impressed by the Volkswagen cars that Allied troops had captured from the Germans.

So he found the best remaining version of the car left over from the Nazi period, painted it in camouflage, and presented it to his superiors as the solution to their urgent need to replace vehicles damaged during the war.

The military hierarchy agreed and on August 22 work began on a contract for 20,000 Volkswagen, plus 500 trailers and 500 military vehicles.

On 27th December 1945 the factory went into production, two months late – and before new year 1946 55 Volkswagen had already been wheeled pout of the factory doors. By March they had hit 1,000.

In the first years the company grow almost exponentially, with 10,000 cars produced by the end of 1946 and turnover already hitting 55 million marks. In 1947 the company tied up its first export deal.

But malnutrition was a significant problem. In the winter of 1946/7 the small town with a population of 20,000 faced a “starvation winter” in which hundreds of thousands of people died nationwide.

At the plant, employees collapsing due to exhaustion was a common problem. Vitamin deficiencies resulting in tooth loss were also rife.

Hirst also had to deal with a lack of qualified employees. Many of the engineers and factory workers who had been active at the factory during the war now sat in prisoner of war camps.

The conditions in the town – also renamed earlier in the year from the catchy City of the Strength through Joy Car to Wolfsburg – were also miserable.

Men were sleeping 14 to a room on straw mattresses, often without woolen blankets. Many workers moved away shortly after arriving.

But Hirst was a master motivator and himself showed an incredible work ethic, working ten- to twelve-hour days.

By wrangling army connections, the young man from west Yorkshire managed to struggle through. At one point he persuaded his commanders to release 1,000 previous builders of the car – known in Nazi times as the Strength through Joy car – from camps.

On another occasion he secured a shipment of fish from Hamburg to fend off hunger.

By the time the Englishman left the company in 1949 it had been transformed into the biggest car company in Germany.

The irony is that the world's largest car maker might have been founded by the Nazis in 1937, but it can thank its survival to a plucky British officer – and the need of the British army for reliable, efficient cars.