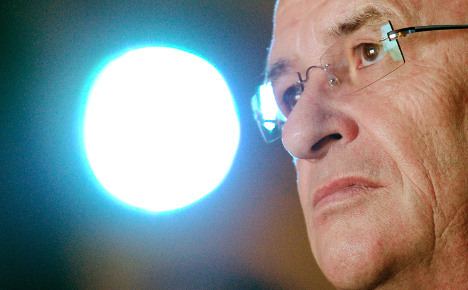 “As CEO I accept responsibility for the irregularities that have been found in diesel engines and have therefore requested the supervisory board to agree on terminating my function,” Winterkorn wrote in a statement.

“Volkswagen needs a fresh start… I am clearing the way for this fresh start with my resignation.”

Winterkorn added that he “was not aware of any wrong doing on my part” and was “stunned that misconduct on such a scale was possible in the Volkswagen Group.”

Volkswagen will announce its new chief executive on Friday, the supervisory board said in a statement after Winterkorn resigned.

“New appointments will be put before the supervisory board's meeting this coming Friday,” the statement read, adding that besides changes in the top job, it was expecting other personnel shifts.

The supervisory board's six-member steering committee had been meeting at Volkswagen's headquarters in Wolfsburg on Wednesday under conditions of tight secrecy.

Winterkorn had offered his “deepest apologies” over the revelations on Tuesday.

“I am infinitely sorry that we have disappointed people's trust. I offer my deepest apologies,” the 68-year-old executive said in a video statement, promising to be “ruthless” in getting to the bottom of the scandal.

According to the US authorities, VW has admitted that it equipped about 482,000 cars in the United States with sophisticated software that covertly turns off pollution controls when the car is being driven.

It turns them on only when it detects that the vehicle is undergoing an emissions test.

With the so-called “defeat device” deactivated, the car can spew pollutant gases into the air, including nitrogen oxide in amounts as much as 40 times higher than emissions standards, said the US Environmental Protection Agency (EPA).

The EPA, which announced the allegations Friday along with California state authorities, is conducting an investigation that could lead to fines amounting to a maximum of more than $18 billion (€16.11 billion).

The US Department of Justice has also launched a criminal inquiry led by its environment and natural resources division, a source told AFP, speaking on condition of anonymity.

The California Air Resources Board, too, is investigating Volkswagen's pollution violations.

New York Attorney General Eric Schneiderman said he had launched his own probe of Volkswagen and would work on it with prosecutors from other states across the United States.

Private law firms are lining up to take on the German company, with a class action suit already being filed by a Seattle law firm.

VW has halted all diesel vehicles sales in the United States during the investigations.

The scale of the exposed deception expanded dramatically Tuesday when Volkswagen said that as many as 11 million diesel vehicles worldwide may have the same “anomalies.”

The full impact on the reputation of Volkswagen, whose parent company also owns brands including Audi, Skoda and Lamborghini, is hard to measure.

The scandal has already hit the share price of other car makers, buffeting international stock markets.

Volkswagen’s position as an icon of German industry means the scandal threatens to damage the otherwise excellent reputation of German companies for honest dealing.

Volkswagen has set aside 6.5 billion euros in provisions for the third quarter to cover the potential costs of the revelations.

While the scandal has been restricted to Volkswagen so far, environmental protection groups, particularly in Germany, suspect other car makers may be using similar technology.

The European carmakers' association ACEA said that while it recognised the gravity of the affair, “there is no evidence to suggest that it's a problem across the whole industry.”

And the German carmakers' federation VDA insisted that diesel engine technology itself was not in question.

The EPA has said it will screen for defeat devices in other manufacturers' diesel vehicles now on the road, although it declined to identify which brands would be tested.

France, Britain and other nations have called for a Europe-wide investigation.

South Korean officials summoned VW representatives for explanations on Tuesday, saying tests would be started by “no later than next month.”

The United Nations has described the revelations as “extremely troubling.”

The German company is likely to face tough questioning in the US House of Representatives' energy and commerce committee, which announced plans for a hearing in the coming weeks.

Volkswagen has promised to be transparent.

“Our company was dishonest… in my German words – we have totally screwed up,” the chief executive of Volkswagen America, Michael Horn, said at an event in New York late Monday.