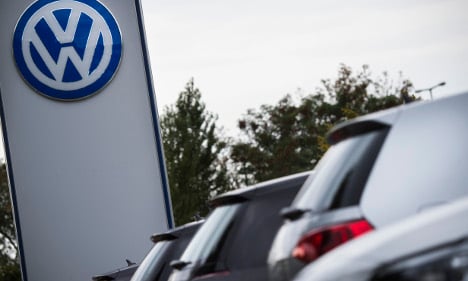 "This is not a minor subject, it's not about speed or the quality of leather," said the French finance minister of the VW scandal. Photo: AFP

Royal also asked French manufacturers to “ensure that such schemes are not taking place in France.”

Her announcement came after Michel Sapin on Tuesday morning told French radio that in order to “reassure” the public, it seemed “necessary” to carry out checks on cars manufactured by other European carmakers.

“We are in a European market, with European rules that need to be respected,” Sapin told Europe 1 radio.

“Even if it's just to reassure people, it seems necessary to me that (checks should be carried out) also on French carmakers,” he said, adding he had no “particular reason” to suspect wrongdoing.

According to US authorities, VW admitted that it had equipped about 482,000 cars in the United States with sophisticated software that covertly turns off pollution controls when the car is being driven and turns them on only when it detects that the car is undergoing an emissions test.

With the so-called “defeat device” deactivated, the car can spew pollutant gases into the air, including nitrogen oxide in amounts as much as 40 percent higher than emissions standards, said the US Environmental Protection Agency.

“This is not a minor subject, it's not about speed or the quality of leather,” stressed Sapin.

“What we are dealing with is making sure people avoid being poisoned by pollution,” said the minister.

German authorities have already announced an investigation into whether Volkswagen or other carmakers are doing anything similar in Germany or Europe.