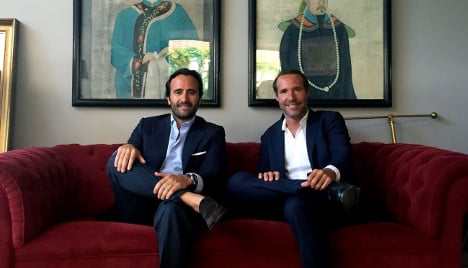 The company had succeeded in buying an apartment in the Spanish capital, entirely through crowdfunding – taking small investments from a large number of investors.

The flat in the Vallecas neighbourhood of Madrid is now owned by 49 investors, who will split the profits from renting it out for €450 per month.

Housers connects developers with people who want to invest, but on a smaller scale: The minimum investment is €100, though bigger projects can ask for a higher amount.

While the notion of crowdfunding housing projects is not new in places like the United States where more than 100 different real estate crowdfunding sites now exist, the idea could have a big impact in Spain where locals still reeling from the 2008 crash may want to invest, but don’t have a large amount of capital upfront.

“Housers is not for big institutions. This is for small investors who don’t have the money, who have a house and a mortgage,” Housers co-founder Tono Brusola told The Local. “We are allowing all kinds of investors to get into the market.”

Between 1996 and 2007, real estate prices in Spain ballooned to about triple what they had been. But when the housing bubble burst in 2008, prices plummeted more than 40 percent and the construction industry collapsed, leaving hundreds of thousands out of work and home-owners in debt.

In 2008, around 28 percent of the homes built during the boom that began in 2001 were standing vacant.

But recent indicators have shown Spain's economy – and housing market – improving, making the country more appealing for investment. And Housers believes that not just those with lots of cash on hand should be able to reap the rewards.

“We wanted to launch a fund to invest in the real estate market. There were indicators that it would go up in Spain after so many years of going down,” Brusola told The Local.

“But our friends only wanted to invest in small quantities. We came to the conclusion to start a crowdfunding site, so that anyone could invest what they wanted and benefit from the property market.”

Brusola and partner Álvaro Luna came up with the idea about a year ago and fully launched in July.

Though the website is currently just in Spanish and is aimed mainly at investors in Spain, Housers plans to launch a new site in English by the end of October to also attract foreign investment in the country.

“First, we will focus on the UK because there is more interest and better deals for the British market,” Brusola said. “And then maybe Germany – we'll see.”

“Since the crisis, because there are not many opportunities in the workplace, I think there are more people trying to make their own opportunities outside of that,” Brusola told The Local.

New laws regulating crowdfunding and providing tax deductions to those who invest in startups have also helped to build up Spain's startup scene.

At the same time, Brusola said that compared to the some ten other countries where he has worked, Spain can be quite bureaucratic when it comes to creating a new business.

Last year, the Organisation for Economic Co-operation and Development (OECD), rated Spain one of the five worst countries for complex and restrictive regulatory procedures for starting a new company. Spain was also ranked among the ten worst countries for placing administrative burdens on startups.

Despite all the paperwork, Brusola said startups still seemed to be growing in Spain.

“There are quite a good number of startups – not like the north of Europe – but compared to Italy and France and Portugal,” Brusola added. “There are still a lot of new startups doing really interesting things.”