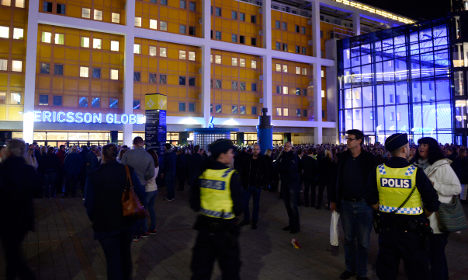 Irish rock group U2 were forced to cancel their concert in the Swedish capital on Sunday night while organizers searched the Globe Arena (Globen) for a suspected gunman.

According to Sweden's Aftonbladet newspaper, the incident – which was initially blamed on technical difficulties – began when it became known to guards that a man with a gun had been let into the arena.

The tabloid wrote that the man had been allowed to enter after saying he was an off-duty police officer and had forgotten to leave his weapon at work.

U2 concert cancelled because a police officer has a gun. This may be the most Swedish story ever. http://t.co/mfcyic1gZ9

Swedish police confirmed to The Local on Monday that an internal investigation had been launched, but Håkan Roswall, chief prosecutor in charge of the case, said on Tuesday that he would end the probe after failing to identify the suspected officer.

“It is unknown if the person in question really is a police officer. If the person is a police officer a crime was still not committed because gun legislation does not apply to the state's weapons,” he said, adding that because the incident supposedly took place while the alleged officer was off duty he could also not be charged with professional misconduct.

Disappointed fans hit out on social media on Sunday after organizers kept them waiting outside the arena for hours before the gig was eventually rescheduled for Tuesday night.

“We apologize for the inconvenience and hope for understanding from fans. Safety is our top priority,” said Live Nation in a statement at the time.

In 3 hours: Tune back in tonight for the final show in Stockholm… #U2ieTour #meerkat http://t.co/zY7LetaJ49