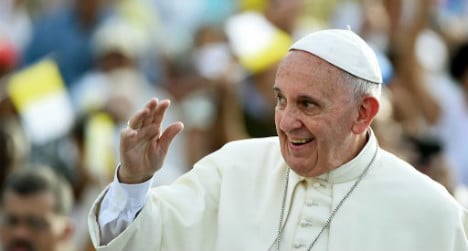 Pope Francis will visit Washington, New York and Philadelphia during his US tour. Photo: Filippo Monteforte/AFP

About 100,000 people are expected at a climate change rally in Washington on Thursday when Pope Francis addresses the US Congress.

The protest is due to take place on the National Mall, the monument-studded expanse of grass in downtown Washington.

The demonstration is set to coincide with Francis's historic speech to a joint meeting of the House and Senate, during which he is expected to urge the lawmakers to protect the environment.

“America is a leading source of the carbon pollution that is accelerating climate change – displacing communities and putting people all over the world at risk – and as such, we have a moral, political, and economic obligation to act,” organizers said in a statement.

A Jeep as Popemobile

In lieu of the Popemobile that Francis used in Cuba, Francis will be waving at crowds lining the streets from a specially equipped Jeep Wrangler built in the United States by the Italian-American auto giant Fiat Chrysler.

The Jeep will have a see-through roof with large openings on the sides, which will allow the pontiff to more directly greet his followers as he leaves the White House in Washington or leads a vast procession through New York's Central Park.

Francis used a similar type of Jeep when he visited Ecuador in July. Unlike previous popes, Francis dislikes traveling in a vehicle sealed with bullet-proof glass. He said last year that it made him feel like he was inside a “can of sardines.”

It's unclear, however, how fuel-efficient the Jeep is. The pope is a passionate environmentalist who could have trouble conveying his message in a country that loves its cars.

Metro braces for the masses

The Washington Metropolitan Area Transit Authority (WMATA) said it was preparing for hundreds of thousands of people to board its subway trains on Wednesday and Thursday to see Francis.

Some Metro station entrances may be shut for security reasons. Some bus lines will be temporarily re-routed since entire neighborhoods will be closed to traffic.

The Federal Bureau of Investigations said its agents have been preparing for months with local police for the pope's visit.

The FBI and the US Department of Homeland Security have designated the pope's six-day visit a “national special security event.”

This is “a significant national or international event” that the DHS believes is “a potential target for terrorism or criminal activity,” the FBI said in a statement.

“There are three major metropolitan areas that are going to all have to seamlessly receive and send off the pope,” Yacone said.

“That all has to be very skillfully thought out – how we're going to protect him, allow access of the public at different venues, and do it in such a manner that law enforcement can screen as many people as possible to keep it secure.”

Add some fun to your texts during the pope's visit. Emojis of Francis riding in a New York yellow cab, eating a hot dog and playing baseball are available through the Apple iTunes store, and for Android devices via Google Play.

The 'Popemoji' application also gives users access to GIF mini-clips in which Francis appears ringing a bell, watering a plant, greeting a crowd or losing his cap in the wind.

“No need to be Catholic to enjoy this,” gushes on five-star app review. “The images on this app are really cute. Downloading this app was a no-brainier.”

Another reviewer, however, blasted the app as being “deceptive and wrong.”

“Preying (not praying) on user's love for the pope is just wrong in every sense,” fumed the one-star review.