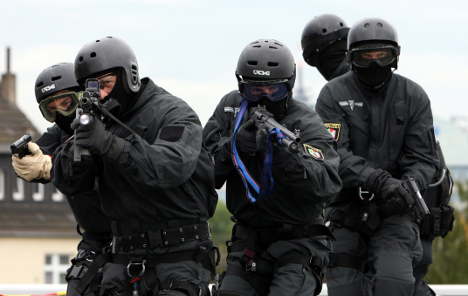 A Spezialeinsatzkommando (SEK) unit doing what they're supposed to. File photo: DPA

On Tuesday afternoon Cologne police chief Wolfgang Albers Cologne announced a drastic measure against a Spezialeinsatzkommando (SEK) unit which had been accused of bullying new recruits – the unit was to be disbanded.

Four of the officers in the SWAT team would never be allowed to serve in an SEK unit again, while five were banned from serving in the SEK in Cologne, the police chief announced.

Albers was reacting to a report into the unit's behaviour which found that officers made new recruits go through humiliating initiation ceremonies including eating a cocktail of ice cream and disgusting foodstuffs off the thighs of other officers and being bound with ropes.

But according to Bild, the officers reacted to the news on Tuesday by destroying their own offices.

The tabloid reports that the cops, who had been marking their farewell by having a barbecue outside their unit's offices, got somewhat carried away as the day went on.

“We were the ones who set this room up, now we're going to return it to its original state,” they reportedly said.

The officers – who had been charged with dealing with some of Germany's most dangerous criminals – then destroyed their old common room with a chainsaw and drove a motorbike through the hallway, all the while heavily intoxicated with alcohol.

A police spokesperson told Bild “They said they were taking back what belonged to them,” adding that “we are investigating further.”