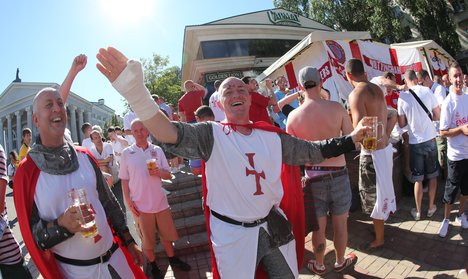 The England fans were in Rimini ahead of a Euro 2016 qualifier match against nearby San Marino. Photo: Alexander Khudoteply/AFP

The violence broke out at a pub late last week as thousands of England football fans descended on the seaside town ahead of their national side's Euro 2016 qualifying match against nearby San Marino, Il Resto del Carlino reported.

A group of young Italians had booked a table at the pub as part of celebrations for a stag party, but when they arrived to raise a few glasses to the groom, the English fans were already out in force.

“There were about a dozen of us and we arrived at about 9.30pm,” one of the Italians told Il Resto del Carlino.

“The English were already a bit drunk, shouting and singing football songs.”

A few drinks and chants never hurt anybody – but according to the Italians, the England fans were spoiling for a fight.

As the Italians were finishing their meal, the England fans allegedly started pushing and offending them.

But the worst was still to come.

“They took a blow up doll from the table with great arrogance,” the Italian said.

“It had been a joke present for our friend who was getting married.”

Following the theft of the doll all hell broke loose. Amid the brawl the English fans allegedly started emptying their glasses of beer over the Italians.

“The situation got out of hand.”

Upon seeing the ruckus, the barman ordered both groups to leave the pub – but that only made things worse and out in the streets the argument descended into physical violence.

“Three of us were kicked and punched,” claimed the Italian. “When the police arrived the hooligans heard the siren and fled.”

The Italian youths have not to reported the incident but were miffed at having their party ruined by the England fans.

Michael Brunskill of the Football Supporters' Federation (FSF), an organization that represents the rights of football fans in England and Wales, told The Local that the FSF “is opposed to any form of violence – be it verbal or physical – and would never condone hooliganism.”

Brunskill did suggest, however, that the typical view of British football fans as lager-swilling hooligans was perhaps a little outdated.

“England and Wales' fan behaviour is generally very good nowadays, with no arrests at away games during the 2013/14 season,” he added.