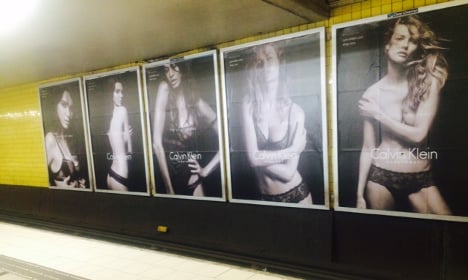 The posters on the Stockholm subway. Photo: The Local
Six formal complaints about the new billboards had been made to the Swedish Advertising Ombudsman (Reklamombudsmannen) by Thursday, all of which argued that the images were sexist, while reports about the controversial posters were being widely shared on social media in Sweden.
The Calvin Klein adverts feature a variety of women wearing lacy bras or thongs along with the caption “the original sexy”. They seen in three different poses, some of which show them touching their own breasts.
Discussions surrounding the posters, currently being displayed at subway stations around the Swedish capital, intensified after former copywriter Nina Åkestam wrote a column in Sweden's Metro newspaper earlier this week describing the clothing firm's approach as “irresponsible and wrong”.
“It's not underwear or nudity in itself that's the problem. There are thousands of ways to take a picture, and that leads to thousands of different things. The problem with this type of advertising is not what it shows, but how it shows it. The women's bodies, poses and facial expressions make them sexualized,” she said. The posters on the Stockholm subway. Photo: The Local
The columnist argued that there is a huge difference between sexy poses and sexist advertising, suggesting that women can be severely affected by images that promote an ideal that they should be “slim, stylish and sexy”.
Her post sparked an intense debate, with others defending the global fashion label's campaign.
One reader Ponus Oberg posted: “stop being insulted over the slightest thing! You have obvious problems when it comes to sexualising the human body! You extreme feminists are dumb not wise!”
Calvin Klein was not immediately reachable for comment by The Local.
Swedish media industry magazine Resume reported on Thursday that it had been in contact with the brand's Swedish public relations agency Patriksson but had not yet received a full response.
What do you think about the posters? Share your thoughts in the comments section below