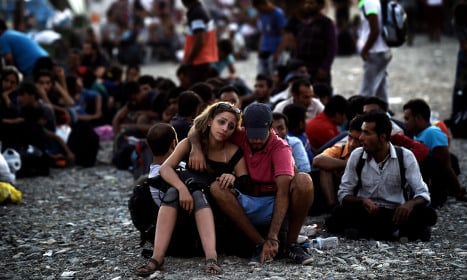 A Syrian couple waits with other migrants for the train near a train station in Macedonia. Photo: Aris Messinis/AFP

The Swiss foreign ministry confirmed a report in the NZZ am Sonntag weekly that the wealthy Alpine nation aimed to send financial aid to Serbia, Macedonia and Bosnia Herzogovina to help them deal with the ballooning migrant crises on their territories.

According to the report, Bern plans to send more than 100,000 francs ($103,000), but ministry spokeswoman Silvia Mueller told AFP the amount had yet to be determined.

The issue will likely be discussed during a bilateral meeting between Switzerland and Serbia next week, she said.

The assistance could be filtered through authorities and national and international aid organisations on the ground, depending on the needs, the ministry said.

According to NZZ am Sonntag, Switzerland has already provided 40,000 francs ($41,500) to help build a refugee camp in a Serbian border town.

Serbia and Macedonia especially have become major transit countries for tens of thousands of migrants trying to reach the EU in recent months, with Macedonia last week forced to declare a state of emergency.

Bern's decision to send money abroad to help deal with Europe’s multifaceted migrant crisis is in line with the way most Swiss would like to respond, according to a poll published Sunday.

The Basel University survey, published by the Schweiz am Sonntag weekly, showed that 60.9 percent of the more than 1,000 people polled last month want Switzerland — home to the Red Cross and with a long humanitarian tradition — to take a leading role in the humanitarian response to the crisis.

But the poll showed that a full 83.1 percent of those questioned want Switzerland to provide generous assistance in the places where the crisis is unfolding, rather than by taking more refugees into the Alpine nation.

Two thirds of the people polled said they feared allowing too many refugees into Switzerland would hurt the country's prosperity, while 44.6 percent said they wanted Swiss borders temporarily closed.

The Swiss government has predicted that the country of eight million people will received around 30,000 asylum requests this year and again in 2016. 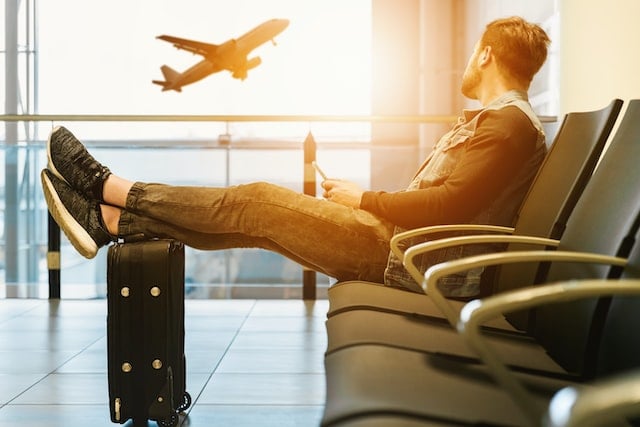 If you are planning to go abroad for a few-weeks holiday, it’s not a problem.

However, if you want to leave Switzerland for several months and come back afterwards without losing your residency rights, then there are some important things you should know.

What are the rules around leaving Switzerland?

How long you can remain abroad without telling Swiss authorities about your absence depends on what kind of work permit you have.

Anyone with a short-term residence permit L can leave the country for no longer than three months. However, be careful, as these permits are usually granted for up to a year, and the three months is a total period, so if you travel a lot for work you need to keep count and make sure you haven’t exceeded 90 days (three months) in total.

You have more leeway with residence permits B and C: you can stay out for up to six months a year.

READ MORE: READER QUESTION: How long can I stay out of Switzerland and keep my residency rights?

While C permits give their holders more sweeping rights, including in regards to staying abroad (see below), B and L permits will lapse if your stay in a foreign country extends beyond these permit-based periods — unless you have had some extenuating circumstances for the delay, like a serious illness that prevented you from traveling (and which can be proven).

In the latter case, authorities may be more lenient about re-instating your permit — though this is not at all certain — than if you come back late without a valid explanation and any proof thereof.

The office in charge of such decisions is your cantonal Einwohnerkontrolle in German-speaking regions, contrôle des habitants in French, and controllo abitanti in Italian.

Another exception would be if your Swiss employer sends you to work abroad — in which case the company would have to arrange your absence and subsequent return to Switzerland with the authorities.

If you have a B or L permit and are thinking of leaving the country for longer than allowed without notifying your local residents’ office, but sneak out instead like a thief in the middle of the night — don’t.

Yes, there is a slight possibility that you will manage to stay under the radar, but in all likelihood your unannounced absence will be noticed eventually.

There is anecdotal evidence of police knocking on the door of an address where a foreigner is registered after neighbours had notified authorities that nobody has lived there for long periods of time.

What about people with C permits?

Obviously, if you got the hard-to-obtain permanent residency permit, you don’t want to lose it, but guard it with your life (in a manner of speaking).

Therefore, if you need to leave Switzerland for more than six months a year (but not longer than four years), then you have the option of putting the permit “on hold.”

You must request this suspension from the cantonal Einwohnerkontrolle / contrôle des habitants /controllo abitanti authorities in writing, explaining the reasons why you plan to remain abroad for a longer-than-permitted period of time.

If you simply leave for more than six months without ‘”freezing” your permit, then it will expire in due time, and you will have to re-apply for it under the usual admission conditions — and you know how difficult and time-consuming that is.

What if you are a dual national?

As long as you have a Swiss passport in addition to a foreign one, you are considered to be a Swiss citizen and can live outside the country for as long you want.