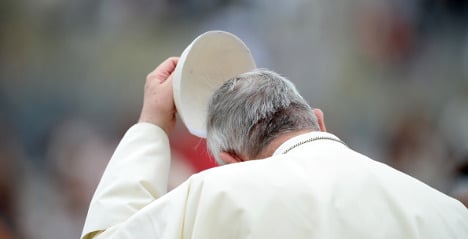 Pope Francis has sent his blessing to a lesbian author of children's books dealing with same-sex families. Photo: Filippo Monteforte

As Vatican officials scrambled to clarify that the message was simply a standard courtesy which did not signal any change in Church teaching on the subject, the author told AFP she had been pleasantly surprised to have received such a positive response.

Francesca Pardi, who writes and publishes books such as “Why you have two mummies”, wrote to Francis in June after the publishing company she runs with her wife came under fire from Christian groups.

She included examples of her works, some of which have recently been controversially withdrawn from nurseries and primary schools by a new mayor in Venice.

“My books present different types of families without setting any of them up as a model,” Pardi told AFP, praising the pope for having responded in a manner that showed “respect and dignity” towards her, her wife and their four children.

“It was not important for me that it was the pope who said it, I am not a Catholic. But it is important to see that we are not up against a wall. A dialogue is possible,” she added.

“Books are to be opened, to be read and to be criticized. What you don't do is ban them.”

In his message, the pope wished the two women “ever more fruitful work in the service of young generations and in spreading authentic human and Christian values.”

Francis has signalled that he wants the Church to adopt a more pragmatic and understanding approach to the situation of believers living in gay relationships, an attitude reflected in his famous “who am I to judge” remark on the subject.

But proposals to integrate a shift to a more welcoming tone into the conclusions of an ongoing Church review of its teaching on the family have been opposed by conservatives.

Bishops from around the world will return to the subject at a Vatican synod in October which will seek to find a compromise on that and other divisive issues.

Pardi and her partner got married in Spain. Italy is the only major western European country that has no provision for same sex couples to have their unions legally recognised. The centre-left government has pledged to enact legislation introducing the possibility of civil unions by the end of this year but there are no plans to legalise gay marriage.