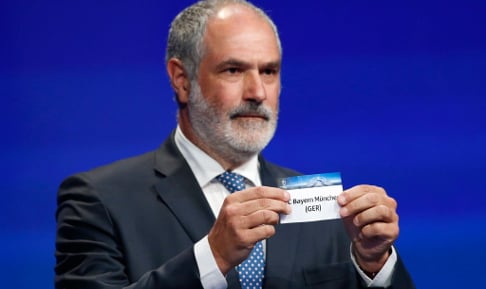 Bayern will face off against some of their former team-mates and World Cup winners in the shape of Mesut Özil and Per Mertesacker of Arsenal.

But their other opponents in Group F, Olympiakos Piraeus and Dinamo Zagreb, should present less of a challenge for the German top dogs.

“I think we can be satisfied. Our goal will very clearly be to get through to the next round,” Bayern and Germany national team defender Jerome Boateng said after the draw late on Thursday.

“If we're good, then we'll get through,” Bayern sporting director Matthias Sammer added.

A reunion with Bayern's other high-profile former team-mate and Germany captain Bastian Schweinsteiger will have to wait, as his new club Manchester United will be in Group B with this year's Bundesliga runners-up VfL Wolfsburg.

Wolfsburg will also be pitched against PSV Eindhoven and CSKA Moscow and will host the Russians on September 15th.

“I think it's not impossible. We will have to outdo ourselves again, but it's a completely manageable group. We can look forward to the games with anticipation,” Wolfsburg manager Klaus Allofs said.

“We can avenge ourselves against two teams that we already played the first time we took part in the Champions League,” goalkeeper Diego Benaglio said.

The other two German clubs in the European championship, Bayer Leverkusen and Borussia Mönchengladbach, will face tougher challenges than Bayern and Wolfsburg.

Leverkusen, in Group E, will be up against defending champions Barcelona and newly-crowned European footballer of the year Lionel Messi as they hope to avenge the worst-ever German defeat in the Champions League – 1:7 in the round of sixteen three years ago.

They will also have AS Roma and BATE Borissow from Belarus to contend with, adding up to what club manager Michael Schade called an “extreme challenge”.

“You can't get a tougher draw than Barcelona. The group has a clear top favourite. But I think we have a 50:50 chance of second place,” Schade said.

Mönchengladbach find themselves in Group D along with Juventus, Manchester City and FC Sevilla, the 2014 and 2015 Europa League winners.

The plucky North Rhine-Westphalia club will be hoping to avenge their exit at the hands of the Andalusians in last season's Europa League  when they play their first game on September 15th.

“We're the team that will surprise people. We'll be measuring ourselves against the best teams in Europe and the world,” Borussia sports director Max Eberl said.

“In our group, the four top leagues in Europe are represented,” he added.