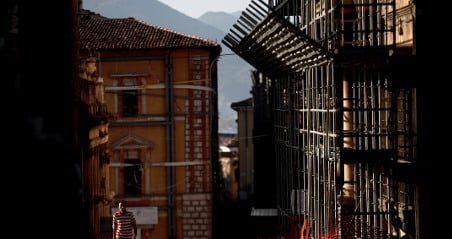 L'Aquila's rebuild since the devastating earthquake in 2009 has languished. Photo: Filippo Monteforte/AFP

Clashes between police and protesters forced the cancellation of the first part of Renzi’s visit to Palazzo Fibbioni, the city’s new council headquarters, Il Messaggero reported.

But he managed to fulfill the second stage of the visit to the Gran Sasso Science Institute, despite tensions nearby.

An estimated 500 people filled the streets to protest against the construction of the Trans Adriatic Pipeline, which is set to bring gas from Azerbaijan to Europe and will cross a seismic area in the Abruzzo city of Sulmona.

Four people, including a police officer, were reportedly injured in the clashes.

The 6.3-magnitude earthquake in April 2009 left 309 dead and L’Aquila and the surrounding area devastated.

Many buildings in the city still lie in ruins, despite hundreds of millions of euros allocated to reconstruction.

Renzi on Tuesday pledged that the “money is there” for the languishing rebuild and that he will return in a year to “check the sites”.

“The priority is the old town,” he added.

It was Renzi's first visit to the city as premier.