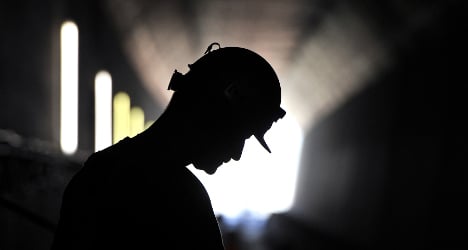 A worker in the new Gotthard base tunnel. Photo: Fabrice Coffrini/AFP

Speaking to the media on Monday, Marco Hirzel of Alptransit Gotthard said the majority of the technical work has been completed, reported news agency ATS.

In the next few weeks the federal transport office (OFT) is expected to give the go ahead for the testing of the 57-kilometre tunnel’s systems – including lighting, safety, communications and ventilation – on October 1st.

When it opens, it will be the safest section of the Swiss rail network, said Alptransit Gotthard director Renzo Simoni.

Over 3,000 test runs will be conducted to ensure the tunnel operates smoothly and safely.

Among the features to be tested is the tunnel’s cooling system, which will bring the temperature down from a natural 45 degrees centigrade to a more bearable 28 degrees.

Around 38 kilometres of secondary tunnelling will enable ventilation in case of fire, and the evacuation of train passengers.

Exactly 17 years after the first blast in the main shaft, the Gotthard base tunnel is set to open on June 1st 2016, when Swiss federal railways (SBB) will take over the operation from AlpTransit Gotthard.

However the tunnel won’t come into scheduled service until December 11th 2016.

The new tunnel, featuring two separate tubes on the north-south axis, aims to provide a quicker and more reliable passenger and freight rail service through the Alps.

As many as 260 freight trains will be able to pass through the tunnel each day, an increase from 180 on the existing Gotthard railway mountain route.

The route between the Swiss cities of Zurich and Lugano will be shortened by around 45 minutes.

Some 28.2 million tonnes of excavated material was removed from the tunnel during the construction process.

With some sections of the tunnel lying below 2,300m of rock, it will not only be the longest rail tunnel in the world but also the deepest.

On June 4th-5th the tunnel’s inauguration will be celebrated with a public festival at both ends which organizers hope will attract 50,000 to 100,000 visitors.

However only 1,000 people will be given a place on the inaugural north and south train journeys on June 1st.

Members of the public will be chosen in a draw in January.