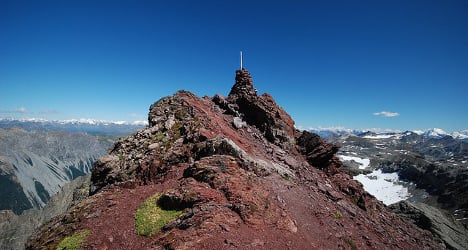 One hiker died on the Piz Lishana. Photo: Vasile Cotovanu

A 62-year-old man lost his life on Saturday night on the Piz Lischana after tripping and falling 200m, reported Graubünden cantonal police.

In the canton of Valais, a 43-year-old Spanish woman died on Sunday morning near Saas-Almagell after leaving the marked trail and being hit by falling ice.

The Spaniard was the second person to die in the area in recent weeks, after a 74-year-old woman lost her life in a fall on a trail above Saas-Almagell on August 17th.

A 58-year-old woman also died on Sunday after falling from a cliff whilst descending Kleiner Mythen near Alpthal in the canton of Schwyz.

In the Jura, a 74-year-old paraglider died after losing control and smashing into a rockface at Balmberg bei Günsberg in the canton of Solothurn.

Witnesses called Swiss air ambulance service Rega but rescue workers were unable to save him.

A base-jumper also lost his life this weekend in Walenstadt in the canton of St Gallen.

The 45-year-old Norwegian man jumped from the ‘Sputnik’ departure point above the Walensee and crashed into a meadow below.

Accidents in the mountains are a frequent occurrence in Switzerland.

The website of hiking organization Schweizer Wanderwege maintains a comprehensive body of safety advice for hikers, with tips on what to do if caught in a storm and how to deal with an emergency situation.

The organization records around 9,000 hiking accidents a year, of which about 40 are fatal.

Most of them could be avoided if hikers followed certain guidelines, it says, which include preparing properly, having decent equipment and choosing a hike suited to one’s ability level.