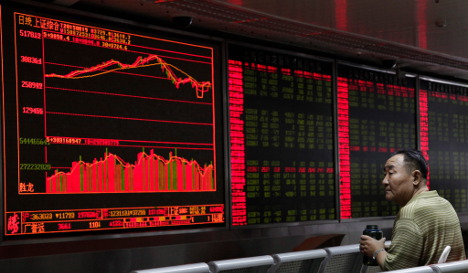 It is the first time the stock market index has fallen below the psychologically-important 10,000 points level since January 2015 (1,000 points represents the level of the index in 1987) and the biggest single-day drop since 2007.

The lowest point of the day came just before 2 pm as the losses to the DAX hit five percent compared with its value at close of trading on Friday, but the market rallied again by time of writing.

Market watchers noted that just as in China, the lion's share of 2015's increase in value on the index of 30 leading German companies had now been wiped out.

Germany is particularly vulnerable to a weakening economic outlook in China due to its huge export business with the world's second-largest economy.

Exports drove much of the German economy's 0.4 percent expansion in the second quarter of 2015, Bloomberg reported on Monday, meaning that falling confidence in China could push Germany back towards zero or negative growth.

That risk is all the greater after the Chinese government's August 11th decision to devalue the yuan, making German goods more expensive thanks to the strong euro.

Daimler and BMW shares had both lost almost four percent of their values by 3pm on Monday.

The Wall Street Journal reported on Monday that German companies including Volkswagen were already slowing production at their factories in China.

But as the eurozone and German consumers recover their confidence – and their appetite for German products – the impact on Germany's economy of China's speedbump may not be catastrophic.

The DAX's loss in value shadowed sharp falls in Asian markets that opened earlier on Monday.

The Tokyo-based Nikkei index fell by 4.6 percent in morning trading to below 19,000 points – its lowest point in the last five months.

Market observers have been watching China anxiously for weeks as the country suffers an abrupt slowdown in economic growth.

China's economy expanded at its slowest rate in 25 years in the first half of 2015, although the roughly seven-percent figure was still beyond the dreams of recovering European nations stuck in the doldrums.

The latest loss of value comes in spite of massive Chinese government efforts in recent weeks to shore up markets in the country.