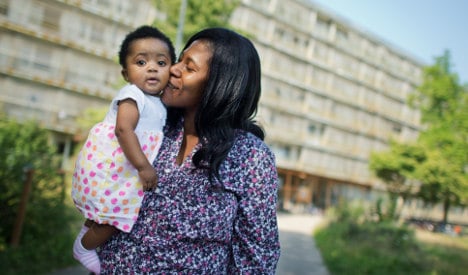 Six-month-old Angela Merkel Adé doesn't have much in common with the German Chancellor.

She was born in a Hanover hospital on February 2nd – the Chancellor was born in Hamburg. Her mother came to Germany from a town in Berekum, Ghana, which is hardly a place where world leaders frequently stop off.

And now the baby lives with her mother, sister and around 730 other asylum-seekers in a disused hospital, transformed into asylum housing.

Her Kiez (neighbourhood) is called Tract-C – a far cry from the Chancellor's comfortable upbringing outside former East Berlin.

Nonetheless, her 26-year-old mum Ophelya Adé said the baby and her namesake are symbols of hope and a way out of harsh conditions.

“She is a very good woman. I like her,” Ophelya said of the adult Merkel on Thursday. The director of the asylum home explained that if the baby is granted permission to stay in Germany, her mother will also be able to stay.

Another city official said that many of the immigrants coming from Ghana are women, many of whom are pregnant and want to give birth within the European Union – although a child born to foreign parents within Germany does not automatically receive German citizenship.

Ophelya added that though she saw some frowns when she went to register her baby's name, no one raised any objections.

Chancellor Merkel got some frowns and more directed her way recently after a Palestinian teenager started to cry in response to Merkel explaining why the country could not take in every immigrant seeking refuge.

The girl, Reem, later defended Merkel amid intense scrutiny of the Chancellor's seemingly awkward response to the situation, and officials said that Reem's family would likely be able to stay.