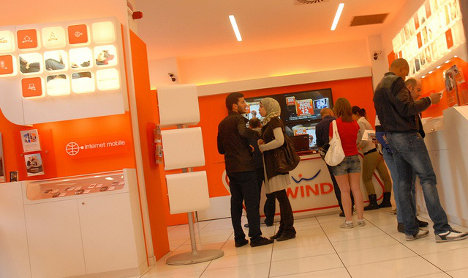 CK Hutchinson Holding Limited, the parent company of 3 Italia, and VimpelCom, the owner of Wind, said they had reached an agreement for a joint venture which will be operated on an equal basis and be comprised of their activities in Italy.

“Wind and 3 Italia are going to acquire through the integration of their activities the size and the necessary efficiency to continue to offer services at competitive prices,” the groups said in a statement.

The combined revenues of the two telecom companies was €6.4 billion in 2014, the statement added.

Besides mobile customers, they will also serve 2.8 billion fixed telephones.

“The union of 3 Italia and Wind is going to create a financially solid and efficient operator, capable of competing at a high level in the market,” said Cannig Fok, a senior executive at CK Hutchinson.

The merged firm will have a board of directors with three members from each company, with the chairman changing every 18 months.

Vodafone will close all 34 of the stores it owns across Spain. Photo: BEN STANSALL / AFP

Vodafone stores in Spanish cities such as Madrid, Barcelona, ​​Bilbao, Seville, Málaga, Granada, Córdoba, Santander, Palma de Mallorca and more will close in the coming six months as part of the operator’s shift to digital.

The company will pull down the shutters on all 34 of the stores it owns across Spain, confirming through its labour adjustment plan (ERE) that 509 employees will lose their jobs.

The operator is affiliated with nearly 600 stores in Spain that act as franchises and distributors, meaning it will still be possible to carry out operations relating to Vodafone in person.

However, it will be a lot harder to get face-to-face customer service from the actual operator, if for example there is a problem with billing or you wish to cancel a contract.

Vodafone CEO Nick Read announced back in 2019 that an increasing number of customers signing up to mobile and internet deals online rather than in stores would mean 15 percent of its high-street retail stores in Europe would close by 2021.

Spain’s main workers’ union UGT referred to Vodafone’s offer to affected workers of severance pay equal to 33 days worked per year with a maximum limit of two years as “stingy”.

You can check all of Vodafone’s proprietary stores in Spain here.