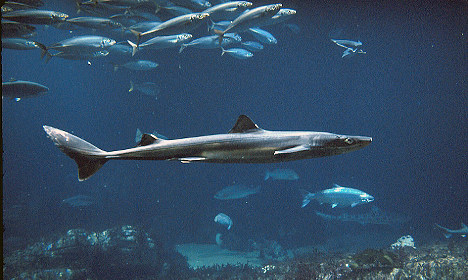 On Monday, two spotted catsharks were released from the dock outside marine aquarium Havets Hus in Lysekil in western Sweden, having been reared on a diet of shrimp and squid.

“We have them here for three years, so we see that they eat well and they can get bigger. We think that their survival rate is better than when they are small,” Helen Sköld, an aquarium manager at Havets Hus told Swedish news agency, TT.

Since 2002, some 60 examples of the protected spotted red catshark have been reared and released at Havets Hus. In addition to strengthening the stock of this species, the catshark releases have also served to bring to light the fact that a large number of the world's shark species are threatened with extinction.

The classic image of a shark fin that protrudes menacingly from the water is an unusual sight in Sweden.

But now and then larger species of sharks, such as basking sharks and porbeagle (otherwise known as a mackerel shark), are seen in Swedish waters.

And in 2004 a stranded oceanic whitetip shark was found in Gullmarsfjorden in Bohuslän.

There are up to 19 varieties of sharks in Swedish waters, but aside from the spiny dogfish shark, only the small-spotted catshark is more common.

According to Mikael Svensson, of the Swedish Species Information Centre (Artdatabanken), the Swedish spiny dogfish population is considered critically endangered and has fallen by over 90 percent in the last 80 years.

In 2004 commercial fishing of dogfish was banned.

But despite the fishing ban, the spiny dogfish population is not recovering.

That's because sharks have a long life cycle. Females do not become sexually mature until 10-15 years of age, have a 24-month gestation period and only give birth to a few young.

According to Mikael Svensson, the future of Swedish sharks remains gloomy, after years of hard fishing and trawling activity that destroyed their habitat.

“No one sees what happens in the ocean. If this kind of species destruction had happened on land, people would have shouted themselves hoarse long before it had gone this far.”