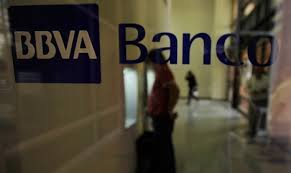 The third-biggest, CaixaBank, said its net earnings doubled to €333 million.

In the case of BBVA, “robust activity and an excellent margin performance confirm the profit growth cycle continues,” said the bank's president, Carlos Torres, in a statement.

The Bilbao-based lender generated gains of €144 million in the quarter from exceptional events including the sale of a stake in Chinese bank CNCB.

It echoed other Spanish banks in saying that the country's economic recovery since 2013 after several years of recession was boosting lending.

Spain received a €41 billion bailout for its banks from eurozone partners in 2012 to save its financial sector from collapse.

In the second quarter, the bank more than doubled its profit from its business in Spain to €462 million from a year earlier.

BBVA said losses from exposure to Spain's construction sector, whose collapse in 2008 triggered the crisis, also lessened in the first half of this year by 35 percent from a year earlier, to €300 million.

In the United States, one of its major markets, BBVA saw its profits in the first half of 2015 rise by nearly 19 percent to €286 million.

Catalan lender CaixaBank said it made net profits of €708 million over the first six months of this year – a 75-percent surge from a year ago.

The bank, which concentrates mostly on the Spanish market, said it was boosted by “intense commercial activity” and by its takeover of British bank Barclays' operations in Spain.

Another Spanish bank, Banco Popular, said Friday its quarterly profits rose by seven percent in the second quarter to €96.5 million.

On Thursday Spain and Europe's biggest bank by capitalisation, Santander, said its quarterly profits surged 17.2 percent to €1.7 billion on growth in markets including Britain and a weak euro.

The earnings were lower than forecast by analysts however and disappointed investors.

CaixaBank shares were 1.8 percent lower and Banco Popular down 3.7 percent, in an IBEX stock index that was down by 0.29 percent overall.