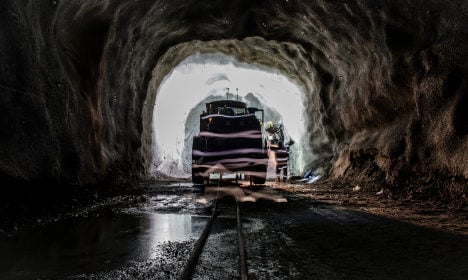 The Malmberget mine in northern Sweden. Photo: Carl-Johan Utsi/TT

Barely two days after the western Swedish city of Gothenburg was rocked by a “fairly big” quake, seismologists at the United States Geological Survey (USGS) reported that an earthquake had occurred in the early hours of Friday in the northern town of Gällivare, with a magnitude of 4.0.

Sweden is not an area that normally experiences a lot of powerful seismic activity, so the news of a second earthquake in less than a week immediately made the headlines in Swedish media.

But according to Björn Lund, a seismologist at Uppsala University, the tremor was a result of mining activity.

“I was a little surprised when they said that the magnitude was so big. In such cases it would be felt across half of Sweden. Since there were no reports of an earthquake, I was suspicious,” Lund told The Local.

“They do not have access to as many stations as we have so when we used ours we were able to localize it to the mining area, and we knew it was induced tremors,” he explained.

Swedish mining group LKAB, which mines continuously in 11 orebodies in the Malmberget area, confirmed to TT that an explosion occurred during the night.

Such tremors in connection with mining are common, says Lund.

“They happen almost every night, and smaller scale ones are usually not felt on the surface. It is not unusual for there to be slightly larger quakes but they are not real earthquakes, just movements resulting from the explosions.”

While tremors such as those experienced on Friday morning are daily occurrences for those living in those parts, those in urban areas such as the earthquake in Gothenburg on Wednesday measuring 2.5 on the Richter scale, are less common.

“It happens less often in urban environments so people are not accustomed to quakes, which is why it becomes such a big deal,” Lund said.

Last September, an earthquake measuring 4.1 shook parts of central Sweden, with experts declaring it to be the strongest the country had experienced in a century.