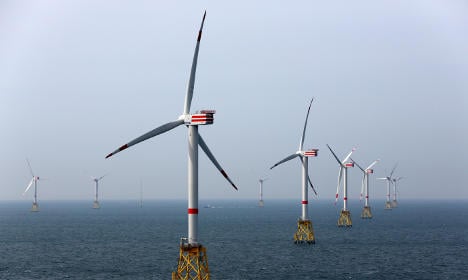 Turbines at the Norsee Ost farm in the North Sea. Photo: DPA

The report complied by the European Wind Energy Assosiation (EWEA) shows that Germany added 1,706 Megawatts (MW) of capacity to the grid from January to July, easily outstripping the highest annual record for the whole of Europe, 1,483 MW added to the grid in 2013.

The surge in German production was a result of 584 new turbines coming online at eight offshore farms in the North and Baltic Seas.

The sharp rise in German offshore production meant that the total capacity installed in Europe was 2,342.9 MW, triple the amount connected in the first six months of 2014.

It also meant that for the first time the United Kingdom was not top of the charts in adding offshore energy production. Germany added over triple the UK total of 140 turbines to the grid.

The other country to add capacity to the grid was the Netherlands, which added 38 turbines providing 114 MW of power.

According to current government plans, 6,500 MW of German energy production will provided by offshore wind turbines by 2020 as they aim to reduce carbon emissions by 80 percent in 2050 in comparison with 1990 levels.

“It has taken the offshore wind industry just six months to set the best year the sector has ever seen in terms of installed capacity,“ Kristian Ruby, Chief Policy Officer at the European Wind Energy Association, said in a statement.

“Explosive growth in Germany and the use of higher capacity wind turbines are major contributors to these numbers,” he added.