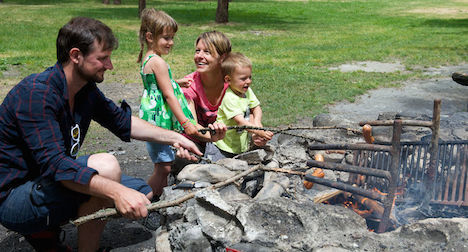 Fireworks are also taboo in the run-up to Switzerland’s national day on August 1st – traditionally celebrated with displays.

It is the first time the canton has imposed a blanket ban, the Berner Zeitung reported.

Anyone violating the ban will face a fine of up to 20,000 francs.

Despite some rain mid-week, the authorities are concerned that the ground remains very dry, with a high risk of fire breaking out.

Only sustained rain is likely to alleviate the situation, and weather forecasts do not suggest this is likely.

The Bernese have a reputation for being slow, and Bern lags behind many Swiss cantons in rolling out a ban.

Since the surrounding cantons of Fribourg, Solothurn, Aargau and Valais imposed their bans, the authorities in Bern say they have noticed a rise in “firework tourism”, or people coming to Bern for firework parties.

This is one reason they have now decided to act.

The cantons of Basel-Country, Basel-City and Graubünden also have fire bans in and around forests.

Bern’s indefinite ban is expected to remain in place over the holiday weekend from July 31st to August 2nd.

While individuals won’t be able to set off fireworks, some organised displays in the coming days may be permitted, such as those on the Biel and Thun lakesides.

However, the traditional firework display on the Gurten mountain will not go ahead this year, the Bern authorities said.